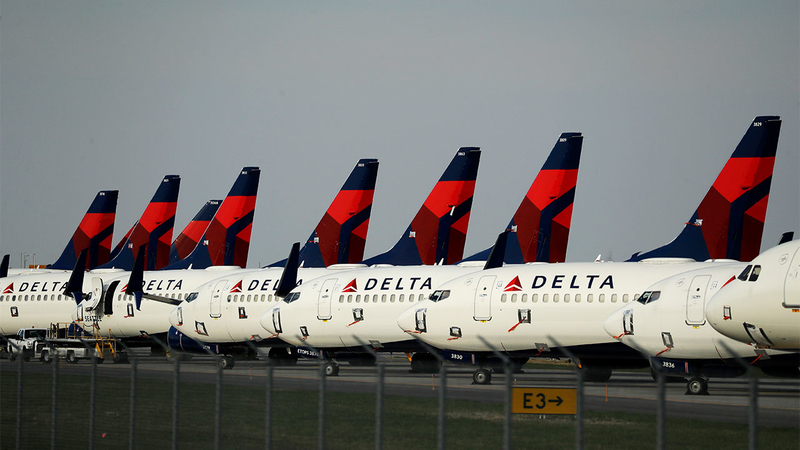 ATLANTA -- The empty middle seat on airplanes, one of the few advantages of pandemic, is about to disappear.

Delta Air Lines, the last remaining US airline to keep middle seats unbooked, has lifted that prohibition as of May 1, the company announced Wednesday. It is another sign of a rebound in demand for air travel and greater willingness of people to resume pre-pandemic activities.

"As vaccinations become more widespread, consumer demand and behaviors show us that confidence in travel is on the rise and customers are ready to reclaim their lives," said Delta's statement Wednesday.

Airlines have insisted that even with the planes fully booked, measures they have taken during the pandemic have greatly reduced the threat of COVID-19 being spread among passengers. Those provisions include frequent exchange of fresh air in the cabin, enhanced cleaning measures and a requirement that passengers wear masks.

Expanded vaccine availability factored into Delta's decision. Delta CEO Ed Bastian said the company's research shows that 64% of its pre-pandemic passenger base anticipate having at least dose of the vaccine by May 1.

"Don't confuse these actions with a return to 'normal,'" said Bastian in a memo to employees Wednesday. "We're still operating in a pandemic, and many of the changes we've made over the past year, such as strengthening our cleanliness protocols and eliminating change fees, will be permanent. Importantly, masks remain critical to our ability to safely welcome more people onboard our planes, and we remain committed to enforcing these requirements."

Delta also announced Wednesday that the credits customers received for canceling flights last year, which were to expire after 12 months, have been extended through the end of 2022. The same is true of any tickets purchased in 2021 that were later canceled.

In the early days of the pandemic, when demand for flights ground to a near halt, all the airlines were keeping the middle seats open as a way to promote social distancing and increase customer confidence in flying. But most of the other airlines started filling the seats last summer.

Delta's move regarding middle seats is not a surprise given that the airline previously said it would keep the prohibition in place only through April 30. People booking flights on May 1 and later have already seen the middle seat available for seat selection on the Delta website.

The airline has not broken down the cost of keeping the seat open longer than other airlines.

"It's expensive. No question about it," Bastian told CNN's Poppy Harlow in February. But the cost of keeping the middle seat open is partly offset by higher fares that Delta has been able to charge, he added.

The amount that Delta passengers paid on average for every mile traveled in the final three months of 2020 fell only 3% from the pre-pandemic period a year earlier. That's significantly better than that of the other three major US airlines -- American Airlines, United and Southwest -- whose fares declined between 15% and 19%.

"People are prioritizing, as they should, their health and safety and comfort as they travel," Bastian told CNN in February. "And we're getting a meaningful premium for travel on Delta."