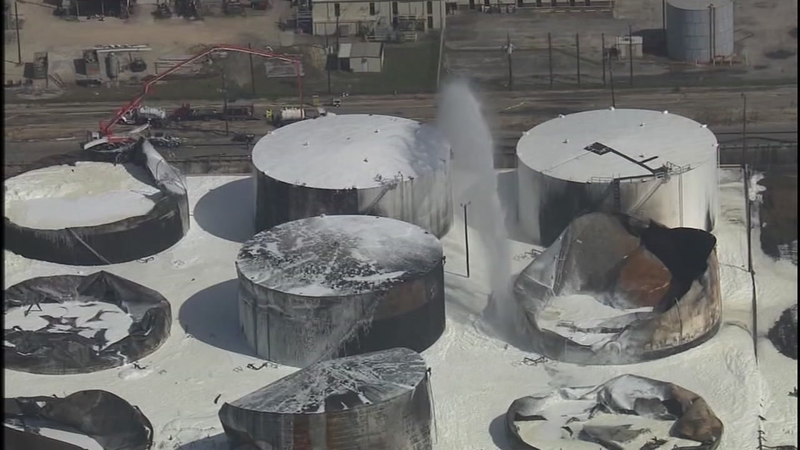 County could take ITC to court

Now it appears Harris County will do the same thing.

On Tuesday, the county attorney received permission to file litigation at "the appropriate time" over the fire and its aftermath.

The primary purpose is to make sure the incident doesn't happen again. The county attorney requested that a third party auditor come in and review what went wrong at the facility.

It also requested to know in detail the costs incurred by the county.

This comes as the Houston Ship Channel remains closed. There's still no timeline on when it will re-open.

The Coast Guard says the Ship Channel won't re-open until there is no more product in the water. Right now, pockets of product remain in the San Jacinto port, Carpenters Bayou, Tucker Bayou, and Old River.

Chemicals from the tanks leaked into the water after a containment wall around the tank farm was breached. Cleanup operations have been underway ever since.

The Environmental Protection Agency said that it recovered over 20,000 barrels of oily water on Monday. By Tuesday morning, that number was up to 33,000 barrels.

ITC says its objective continues to be to empty the benzene-containing tanks damaged by the fire.

A chance of re-ignition still exists until that happens.

ITC said during an update Tuesday morning that it couldn't transfer the product from one of the tanks, 80-13, due to the changing wind shift. The goal Tuesday will be to start removing chemical from that tank.

According to the company, it has also made progress in remediating the ditches along Tidal Road, Independence Parkway and the property around the facility.


Even though the cloud of smoke is gone, people in the area are still frustrated and concerned about their health.

"So you have to wonder is there something out there that's not being told because they don't want the public to know," said Cindy Keener, who attended a town hall about the incident.

"We keep seeing the same spokesperson, the same tears and what are we getting from that?" said Kenia Escobar, who lives near the ITC facility.

If you have concerns about your health and you don't have a care provider, Harris Health System's Ask My Nurse hotline will remain open through 8:30 p.m. Tuesday. The number is 713-634-1110.

ITC says that so far it has received 2,000 calls to its claims hotline. Three hundred claims have been submitted.

"Between ITC's insurance and the available financial resources, ITC will prevail through this," said Brent Weber, ITC incident commander.

"I can assure you that our executives are very, very involved, working very hard with this incident. They will guide us in the right direction and make sure that we have the resources to ensure that we get back to where we were," said ITC spokeswoman Alice Richardson.

As a precaution, Harris County Commissioner Precinct 2 has closed the following parks with waterfronts as cleanup continues: