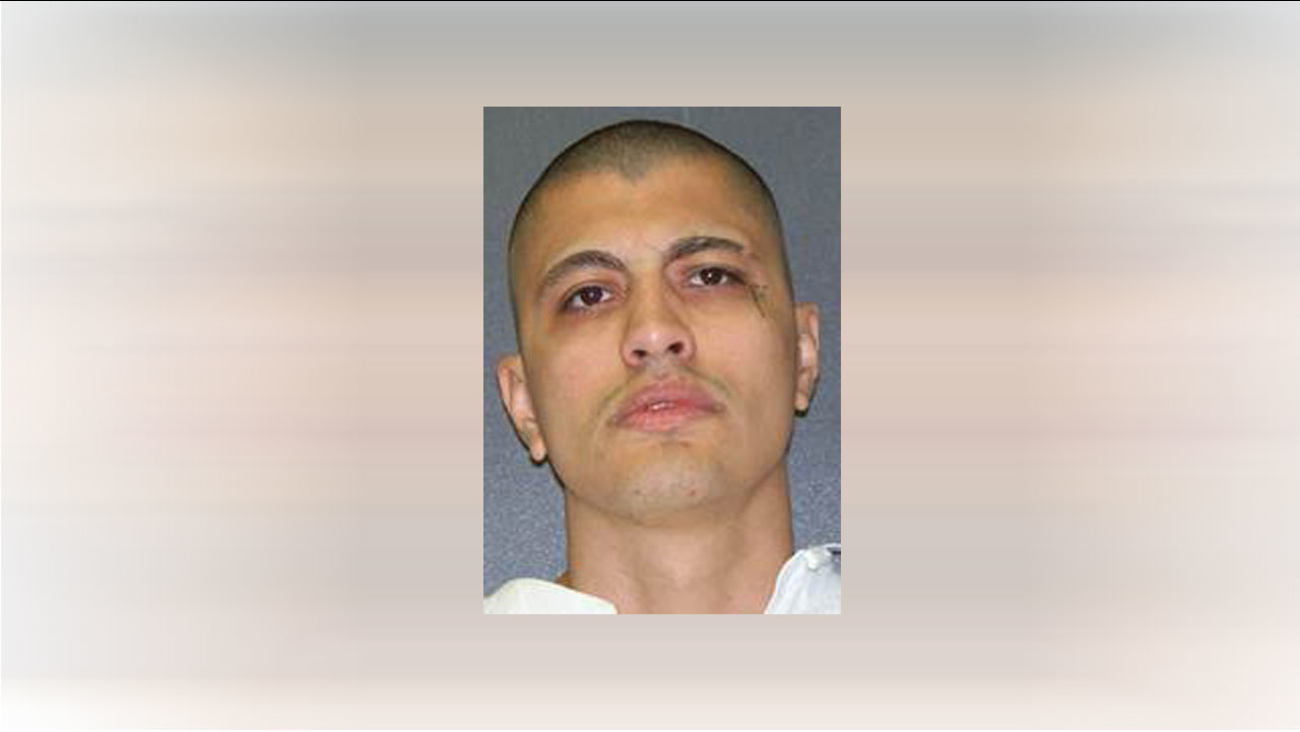 HUNTSVILLE, TX -- A Texas man already being sought for a neighbor's slaying when he killed a Dallas police officer outside a club was executed Wednesday.

Licho Escamilla was put to death for the fatal 2001 shooting of Christopher Kevin James, who was trying to break up a brawl involving Escamilla. The 33-year-old prisoner was pronounced dead at 6:31 p.m. CDT - 18 minutes after the lethal injection began.

Escamilla became the 24th convicted killer executed this year in the United States. Texas has accounted for 12 of the executions.

Before dying, Escamilla looked at the slain officer's daughter, who was seated a few feet away watching through a window, and told her: "God bless your heart."

He turned to his own relatives, who were in a separate witness space but could see him through the same glass, and said he loved them and all his supporters.

"They will have to take that up with God," he added. "Let everyone know it's not over."

He took two breaths as the sedative pentobarbital took effect, then became still. His sister cried and screamed for God not to take him. Her wails nearly masked the sound of rumbling motorcycles outside the prison where bikers supporting the punishment gathered.

The U.S. Supreme Court refused to review Escamilla's case last week and no additional appeals were filed as his execution neared. The Texas Board of Pardons and Paroles on Monday decided against a reprieve and clemency.

James and three other uniformed officers were working off-duty security in November 2001 when a brawl started outside a Dallas club. Escamilla, who was involved in the brawl, pulled out a gun and opened fire on the officers as they tried to end the fight.

The bullets from his 9 mm semi-automatic handgun struck James twice, knocking him to the ground. Escamilla then calmly walked up to the officer and fired three more shots into the back of his head before running and exchanging shots with other officers, witnesses said. A second officer wounded in the shootout survived.

A wounded Escamilla was arrested as he tried to carjack a truck.

About a half-dozen Dallas police officers stood at attention and saluted as relatives of the slain officer entered the prison in Huntsville ahead of the execution. More arrived later to show their support and also saluted when they emerged.

"It's been a long time waiting for justice to be served," said Kevin Janse, a family spokesman who read a statement afterward. "We will grieve for him forever.

"Kevin was dedicated to making a difference," he said, referring to James by his middle name. "The night he died he ran straight into gunfire to protect and serve those in harm's way."

James, 34, had earned dozens of commendations during his nearly seven years on the Dallas police force after graduating at the top of his cadet class. He was working the off-duty security job to earn extra money so he and his new wife could buy a house.

Escamilla was 19 at the time of the officer's killing and a warrant had been issued for him in the shooting death of a West Dallas neighbor nearly three weeks earlier.

Escamilla's trial attorneys told jurors he was responsible for James' slaying but argued it didn't merit a death sentence because James wasn't officially on duty, meaning the crime didn't qualify as a capital murder.

He was sentenced to death in October 2002. At his trial in Dallas, Escamilla grabbed a water pitcher off the defense table and threw it at the jury as the judge was reading his sentence.

Escamilla also started kicking and hitting people and hid under the table until he was subdued by deputies who triggered an electronic stun belt he was wearing.