'Dancing with the Stars' recap: Who was sent home after Disney night?

From "Moana" to "Mary Poppins," Disney favorites got toes tapping on 'Dancing with the Stars'
KTRK 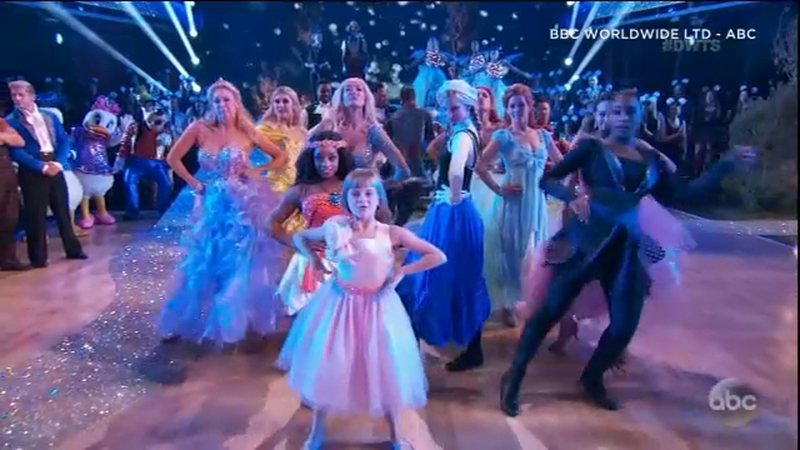 'Dancing with the Stars' makes some Disney magic

LOS ANGELES -- We can't actually go to Disneyland right now because of COVID-19, so to help remind us of the magic we're missing "Dancing with the Stars" held its annual "Disney Night."

They brought in several of the colorful, lighted floats from the iconic Main Street Electrical Parade to help kick things off. And host Tyra Banks was dressed as an updated, mod Minnie Mouse.

Each of the 14 remaining couples performed to favorite Disney tunes. But sadly, at the end of the night, we'll have our second elimination of the season.

Nev Schulman and Jenna
24 out of 30
"Angelica" from "Pirates of the Caribbean" / Argentine tango
They're both big Disney fans so when they learn their song is from "Pirates of the Caribbean" they decide to go all out with character and costume. They set the mood with style and flair for their Argentine tango. Bruno Tonioli called the routine another hit for Captain Jack Sparrow; he enjoyed the mix of camp while maintaining technique. Carrie Ann Inaba also applauded the use of character. Derek Hough thought they nailed it!

Johnny Weir and Britt
24 out of 30
"Reflection" from "Mulan" / Rumba
Johnny loves that this song represents the strength of family and sacrifice in the movie; he says it was the same for him during his skating years. He parents gave him everything; they know this dance is for them! Carrie Ann felt like with this dance Johnny made the transition from skater to ballroom dancer. Derek praised his lines and technique; and Bruno was happy to see him playing a character and projecting emotion.

Kaitlyn Bristowe and Artem
23 out of 30
"How Far I'll Go" from "Moana" / Rumba
Reality star Kaitlyn Bristowe nursed her sprained ankle for another week but you couldn't tell there was an injury with her rumba. Artem choreographed a flowing routine to "How Far I'll Go" from "Moana." And, with the film's Hawaiian theme, Kaitlyn got to dance barefoot and that made it easier on her ankle! Carrie Ann called this the best dance of the night, and a beautifully told story; Bruno said the dance reminded him of water, in a wonderful way. Derek wanted a bit more technique, so he scored them down a point.

Jeannie Mai & Brando
22 out of 30
"Married Life from "Up"/ Viennese waltz
This movie has a special meaning to Jeannie; she watched it with her fiancée and told him she wants to grow old with him like the animated characters in the movie. They start the routine with a giant bunch of balloons; they end with those balloons covering the dance floor. Carrie Ann told Jeannie she makes an adorable little old lady, and thinks her partnership with Brandon is spot on; Derek told the couple the dance was beautiful and her best performance yet; Bruno thought they were able to catch the essence of the film, and the dance was pure storytelling. After Bruno gave her an 8, Jeannie ran and grabbed the scoring paddle out of his hand! She wanted to take it home for a souvenir!

Chrishell Stause and Gleb
22 out of 30
"A Dream is a Wish Your Heart Makes" from "Cinderella"/ Waltz
She totally relates to the lyrics of this song because she's shared with us that "rags to riches" is her life story. She spent seven years on "All My Children" and it changed her life. Chrishell's a little worried about doing the waltz because she says she's clumsy. Gleb assures her later it's his job to change that. Bruno called her the belle of the ball and the ultimate Disney princess. Carrie Ann thought they made a stunning couple (but watch those shoulders!). And Derek thought it was a beautiful dance, but wants to see her work on her turns.

Vernon Davis and Peta
22 out of 30
"Be our Guest" from Beauty and the Beast / Quickstep
The former NFL great was excited with this movie because he thought he'd be the beast; alas, Peta had to tell him no, he'd be playing a candlestick. Derek said Vernon brings so much energy and joy to the dance floor, he loves watching him. Bruno likes the way Vernon exudes confidence and connects with both Peta and anyone else in the room. Carrie Ann thinks the two have found a nice balance in their partnership, and this dance was one of her favorites of the night.

AJ McLean and Cheryl
21 out of 30
"Prince Ali" from "Aladdin" / Quickstep
AJ is the dad to two young daughters and they seem to already look like Disney princesses! Derek told AJ he always puts a smile on his face, and that he keeps improving every week. Bruno agreed. Carrie Ann likes that AJ brings a little of his own signature style and flair to the ballroom and wants him to keep that up.

Monica Aldama and Val
21 out of 30
"Part of Your World" from "Little Mermaid"/ Viennese waltz
Monica was a little homesick for her family and for Texas. She's known as a coach but says her favorite job is wife and mother, so she dedicated the dance to her family. Bruno thought the dance was fluid, and he likes her connection with Val, but told her to watch her posture. For Derek, he said she should watch her feet. Carrie Ann liked seeing this more relaxed Monica and reminded her that when she has fun, we all have fun.

Jesse Metcalfe and Sharna
20 out of 30
"King of New York" from "Newsies" / Jive
The vibe from this song and show makes Jesse a bit nostalgic from his early days as an actor in NYC, when he was ready to take on the world. Bruno enjoyed how he played the role with the dance; but both Carrie Ann and Derek thought the routine needed more actual "jive" in it. Jesse and Sharna agreed!

Justina Machado and Sasha
19 out of 30
"Supercalefragilistic" from "Mary Poppins" / Charleston
Justina can totally relate to the character of Mary Poppins; Justina is the oldest of five kids, with a wide age range, and she's always tried to be a role model to them. Carrie Ann thought the dance was perfectly in sync; Bruno called it sweetly delicious and lovely. But he also said, and Derek agreed, that there was not enough Charleston footwork in the dance.

Skai Jackson and Alan
18 out of 30
"Almost There" from "The Princess and the Frog" / Jive
Skai nobly overcame last week's stumble and left her nerves behind to tackle another week; and the jive to boot! She loves Princess Tiana's determination and drive in the movie and totally relates to her. Bruno thought the dance was well done, but told Skai to loosen up a bit. Carrie Ann gave her an "atta girl" for getting back on track. Derek

Nelly and Daniela
18 out of 30
"It's Alright" from "Soul" / Foxtrot
What's this song? You're not familiar with it? Well that's because it's from a movie that won't be released until November. Nelly and Daniela got their own special screening! Nelly liked the message of the movie, and can relate: work hard, do what you love, follow your dreams. Derek praised him for handling his first ballroom style dance very smoothly. Bruno thought he looked like a gentlemen, and that this was a "proper" foxtrot. Carrie Ann enjoys his naturalness but wants to see him "break out" next week.
She told him not to be so safe!

Anne Heche and Keo
15 out of 30
"Zero to Hero" from "Hercules" / Quickstep
Anne is great at bringing character to the ballroom. You believed she's a goddess trying to keep up with this Greek God. Carrie Ann thought they started out great, but lost it somewhere in the middle. She advised the duo to "recalibrate" their connection. Derek's told Anne she should learn the dance by herself, so that when she and Keo dance together, they can work on becoming one. She's relying on him too much.

Carole Baskin and Pasha
12 out of 30
"Circle of Life" from "The Lion King"/ Samba
Carole gives us quick lesson about big cats; ideally, they should be in the wild but once they've been around people, they lose their edge. She gets tears in her eyes when talking about wild animals needing their freedom. Carole said her whole purpose for doing this show was to help spread the word about animal rights. She did that. But the judges didn't think she did much dancing this week. Bruno thought she just moved through it; Carrie Ann felt her love, said the routine lacked everything else. Derek gave them a 10 for costumes, hair and make-up; but there was no rhythm, no bounce to the dance.

Tyra made quick work of letting us know the 12 "safe" couples. Then it was down to the bottom two: Anne and Carole. No surprise, it was cat-loving Carole who was eliminated.
Report a correction or typo
Related topics:
arts & entertainmentdisneydancing with the starsballroom dancingreality television
Copyright © 2022 KTRK-TV. All Rights Reserved.
TOP STORIES
Preacher reaches out to suspect who stole from his church twice
Carjacking suspect threw 3-year-old out of truck, mother says
Officer shoots suspect in northeast Houston, HPD says
Fifth Ward residents upset over Union Pacific campaign donations
Expert weighs in on when you can buy a car amid chip shortage
Lina Hidalgo suggests DA could have her 'indicted' as political ploy
Santa Fe librarian still trying to make sense of high school shooting
Show More
Houston janitors fight for an increase in hourly pay
Police have no leads on skeletal remains found nearly 6 months ago
Here's why we're increasing rain chances and rainfall amounts
Houston Dash standout expresses excitement on equal pay decision
18-year-old arrested in shooting death of man with cane, HPD says
More TOP STORIES News