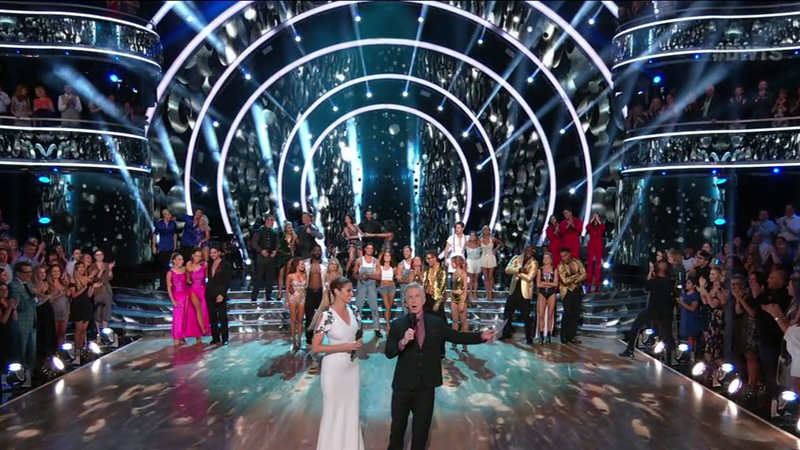 LOS ANGELES -- For week four of "Dancing with the Stars," the 10 remaining celebrities got by with a little help from their friends, as the couples each added an additional dancer to their original pair and became a trio.

We saw several familiar faces return to the ballroom, including previous DWTS champs Rashad Jennings and Melissa Rycroft, plus Joey Fatone, Nastia Liuken and Amy Purdy, to name a few.

We saw a wide variety of dances including Tango, Cha-Cha, Paso Doblé, Salsa, Argentine Tango and Charleston. Here's a rundown of the night's scores, from highest to lowest:

Milo Manheim- 29 out of 30
Milo is motivated. His score of 27 from last week had him thirsting for a perfect score. DWTS recruited season 20's Riker Lynch for a Salsa trio with Milo and Witney. Riker said the salsa was one of his favorite dances. Not so much for Milo. But it seemed Riker inspired Milo and he pushed through to two 10s. Those came from Carrie Ann Inaba and Bruno Tonioli, who both praised the trio's teamwork and attention to detail. Len Goodman awarded them a 9, and thought the routine was fast, clean and in control.

Mary Lou Retton- 26 out of 30
It's gymnast times two with Nastia Liuken from season 20 joining Mary Lou and Sasha for the Charleston. The two tumblers have known each other for many years. In fact, Mary Lou said Nastia is like a daughter to her. The routine is very fast, and Retton had a tough time at first. After a mini breakdown in rehearsal, she got it together and they rocked the ballroom performance. Len thought the dance was snappy and left him a "happy chappy." Bruno praised Sasha for showcasing both women perfectly. And Carrie Ann told Mary Lou while she was great last week, this week she was even better.

Tinashe- 26 out of 30
Tinashe and Brandon came into the week full of determination because they did not want to be in jeopardy again. Their trio partner is season 18 runner-up Amy Purdy, who said she was honored to be back in the ballroom, but also very nervous. It didn't show. Brandon choreographed a unique Tango that highlighted all of their skills. All of the judges applauded his creativity, as well as Tinashe's performance.

Alexis Ren- 25 out of 30
Another young actress, dancer, model, social media star joined Alexis and Alan for an electronic dance inspired tango: Maddie Ziegler, who has performed many times with singer Sia. The young women giggled their way through rehearsal with "annoying big brother" Alan. They had a good time poking fun at Alan's habit of saying "one more time" because it was never just one more time. Len thought there was a good mix of Tango content, and Bruno called the dance elegant and sophisticated. Carrie Ann agreed it was strong, but said she sometimes felt like she was watching three soloists rather than one cohesive unit.

Juan Pablo Di Pace- 24 out of 30
The winner from the DWTS' all-star season, Melissa Rycroft, joined Juan Pablo and Cheryl for a Cha-Cha. Since the couple earned a perfect score and standing ovation from Len last week, they knew they had to bring it. Melissa offers her best advice to J.P. regarding the show: always listen to your pro. Len said the dance was terrific and told J.P his bottom is the tops. Not surprisingly, Bruno seconded that motion and thought Di Pace handled his two partners with ease and control.

Evanna Lynch- 24 out of 30
Evanna's trio partner is a good friend from Hogwarts. Actress Scarlett Byrne, who played Pansy Parkinson in the "Harry Potter" series, joined in for a little Salsa action. Keo's hope was that the women's friendship would translate to girl power (and a little sass) on the dance floor. Len thought the routine had a nice amount of content and was very polished. Bruno told Evanna she's going in the right direction each week, and is brighter and livelier with every dance. Carrie Ann agreed that Evanna is expanding every week.

DeMarcus Ware- 22 out of 30
We haven't seen Marcus this far down the leader board yet this season. He did start the rehearsal week on the injured list. And talk about a freak accident. When his trio partner, fellow NFL great and season 24 champion Rashad Jennings came to greet DeMarcus, they did a chest bump that dislocated Ware's finger. He had to take a trip to the emergency room where the doctor snapped his finger back into place and was almost good as new. The incident had to have taken a bit of a toll on the group, and while Lindsay's Paso Doble was fun, the judges didn't think it quite came together like it should have.

John enjoyed his weeklong bromance with season 4 runner-up Joey Fatone. Emma's Greek God theme really put the men through their paces, but they met the challenge. Carrie Ann thought the choreography brought out a new side to John that we haven't seen in the ballroom. Len was happy that they went right into the dance and thought the dance had passion and attack.

Bobby Bones- 20 out of 30
Bobby, Sharna and guest Lindsey Stirling, runner-up from season 25, melded a Cha-Cha with a classic MC Hammer song, "U Can't Touch This." Turns out Bobby and Lindsey are friends, and she's the first person he called when he was approached to do DWTS. The intent was clearly to have fun, and they definitely did that. As Len said, they nailed the"Hammer" part, but the Cha-Cha, not so much. Bruno said they sledgehammered the Cha-Cha, but the dance was very entertaining.

Joe Amabile- 15 out of 30
"Grocery Store Joe" brought a friend from the "Bachelor Nation" to join him for the Salsa: model Jordan Kimball. Jenna had two tall good looking drinks of water as bookends. The only problem was they couldn't dance. She worked as hard as she could in her cutoff Daisy Dukes; they were in overalls. At the end of the dance, they drenched themselves in a bucket of water ala "Flashdance." Bruno said he wasn't sure if he was watching "Magic Mike" or "Tragic Mike". Both Carrie Ann and Len praised Jenna for what she was able to do with two non-dancers.