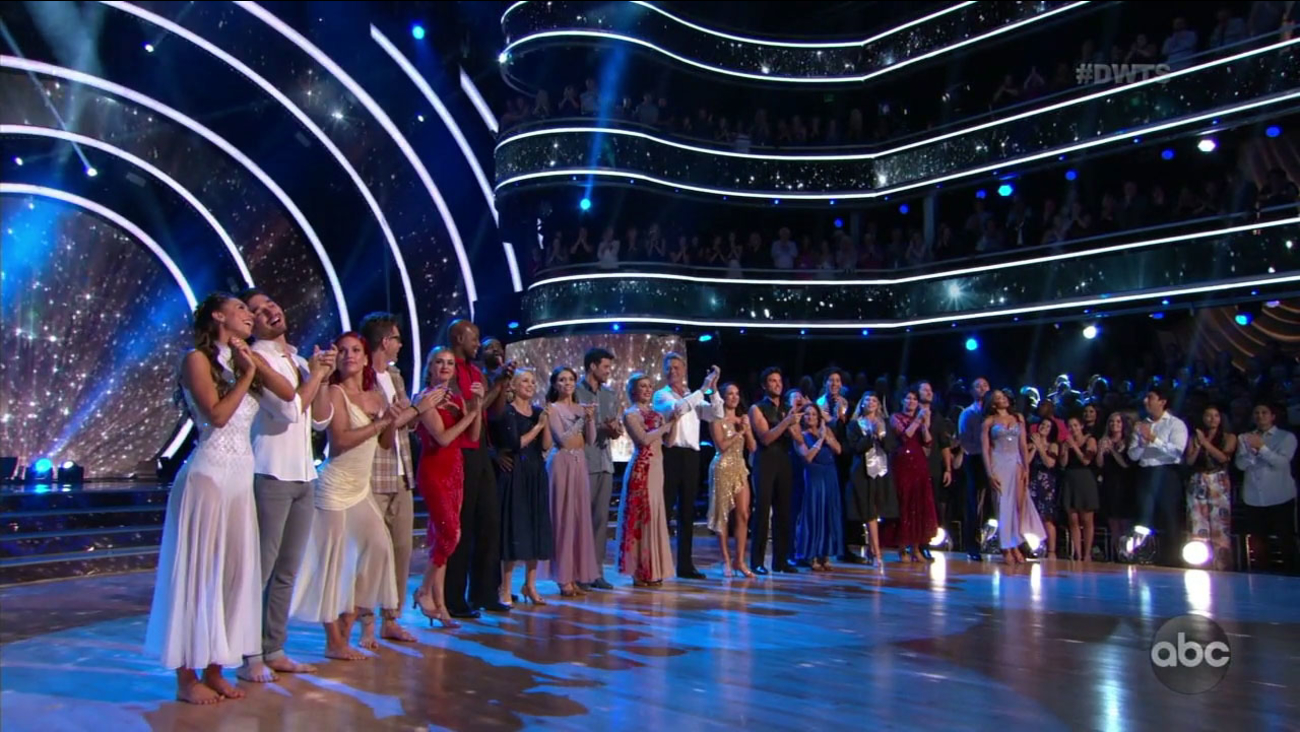 The professional dancers and their celebrity partners gathered on the dance floor for the opening of "Dancing With the Stars."

LOS ANGELES -- For the "Dancing with the Stars" fan-favorite episode dubbed "Most Memorable Year," the 11 remaining contestants and their pro partners performed routines inspired by a year that marked an important and significant time in each of their lives.

Some of these events were the "highs" they experienced: a football championship, or an Olympic medal. Some were life-changing in other ways, like the loss of a loved one.

Either way, these are the kinds of memorable moments that have us reaching for the tissue box while we're reaching for our phones and voting for our favorites!
Here's a recap of the night's scores, from highest to lowest:

Juan Pablo Di Pace- 30 out of 30
The native of Buenos Aires chose 1999 as his most memorable year because that's when he left Argentina to chase his dream: he wanted to be an entertainer. The actor and singer said he'd been bullied a lot as a kid and it's when he found the arts that the light bulb went on and he knew he'd found what he was meant to do in life. Cheryl choreographed a sexy, sassy Samba that celebrated his journey. Head judge Len Goodman couldn't find the words to describe this perfect routine - he simply gave a standing ovation. Bruno Tonioli said it was one of the best Sambas he'd ever seen, and Carrie Ann Inaba agreed, saying the dance was off the charts. It was the season's first 10, and first perfect score.

Evanna Lynch- 27 out of 30
Wizards, warlocks, witches and we regular muggles can guess that 2006 is Evanna's most memorable year. That's the year she joined the world of "Harry Potter" and her life was changed forever. The backstory she revealed is that as a youngster, Evanna had suffered from an eating disorder. She was a huge fan of the Potter books, and she wrote a fan letter to author J.K. Rowling. They struck up a pen pal relationship, and Lynch says that friendship along with the message of the books helped her through her disorder. She could see being creative as an outlet. Len called her Viennese Waltz a magic performance, with power and gusto and elegance. Carrie Ann agreed it showed many dimensions and was well rounded. And Bruno said he was under her spell.

Milo Manheim- 27 out of 30
Milo joked that since he's only 17 years old his choice for most memorable year is limited. But clearly 2018 is tops for him. His first movie, Disney Channel's "Zombies" was a hit, and he's graduating from high school and heading to college. Plus he's on DWTS! Witney choreographed a fun Jive that celebrated where Milo is in his life. It even included a backflip off the judges' table! Bruno considers Milo a graduate, with honors, who is ready for the big leagues. Carrie Ann thinks his light is shining brightly. Len liked the fun, sharp, content-filled Jive.

Tinashe- 27 out of 30
The singer said 2014 is the year she focused on as her most memorable. It was then Tinashe released her first album and really kicked off her career. Mom and dad shared some great old home video showing she's been singing since she was a baby. Tinashe even started writing music at age 6! From a young age, her parents encouraged her artistic sensibility and she says that's what gave her the courage to pursue her dreams. The Rumba she and Brandon performed was a celebration of the artist she has become. Len called the routine their best dance yet. Carrie Ann thinks she is unstoppable.

Alexis Ren- 26 out of 30
Alexis' mom died of cancer and her memorable year of 2014 reflects on her dealing with that battle, and huge loss. She dedicated Contemporary routine to her mom's memory, but also said the whole reason she did DWTS was because it was her mom's favorite show. Her partner Alan advised her not to dance the routine, just feel it. Len said Alexis never disappoints him and this was a solid, fluid routine. Bruno reminded her she has a guardian angel with her at all times and for this round she danced like an angel. Carrie Ann said this dance was an elegant legacy for her mother.

DeMarcus Ware- 26 out of 30
For any pro football player, a Super Bowl win is the ultimate goal. That's what DeMarcus was able to accomplish in 2016, his most memorable year. But it wasn't just the fact that his team won the league's top prize. He said it was made all the sweeter because he had his two children in the stands to witness the victory. DeMarcus always wants to show them if they work hard they can achieve anything. Lindsay's envelope-pushing Argentine Tango ended with his kids coming out for a big hug. All three judges were blown away by one big Superman-inspired lift in the routine and were impressed overall with his mix of power and elegance.

Mary Lou Retton- 24 out of 30
No surprise, Mary Lou's memorable year is 1984 when she won the gold medal at the Olympics. The story most of us didn't know about that time, and what made the victory that much sweeter for Retton, is that she had undergone knee surgery just six weeks before the games. Doctors had told her she shouldn't compete AT ALL, but she was determined to prove them wrong. She performed a Viennese Waltz to the Queen anthem "We are the Champions" and said the song kept her going through tough times. Len told Mary Lou she epitomizes an athlete's fighting spirit and gave a lovely performance. Bruno called it a wonderful celebration, and Carrie Ann wiped away tears and said she was deeply touched.

Bobby Bones- 23 out of 30
Bobby is completely and utterly proud of something he did in 1998. It's something no one else in his family had ever done: he graduated from high school. Bobby's mom was a young teen when she had him, and his dad was not in his life at all. He recognized very early on that education was the key for him to be able to break the cycle of poverty that plagued his family. His message to everyone: it doesn't matter where you come from, what matters is where you are going. Sharna choreographed an emotional routine to "A Million Dreams" from "The Greatest Showman" and it earned Bobby his highest score yet. The judges all thought he had tapped into something by going through this process, and encouraged him to keep on that path.

John Schneider- 21 out of 30
Two major events made 2016 the most memorable for John: his homestead in Louisiana was completely flooded after a major storm, and months after that his mother passed away. Both milestones brought him closer to his girlfriend, Alicia, and John thinks his mom left knowing he had someone who would love and support him in her absence. Bruno and Carrie Ann thought he brought out beautiful emotions and expressiveness in his Waltz. Len agreed, but advised John that if he was going to shine, he needs to have a bit more polish.

Nancy McKeon- 22 out of 30
Nancy's family is her heart and she's proud to be a wife and mother. Her memorable year was 2006, when her second daughter was born and the year she considered her life complete. The Rumba Val choreographed celebrated family, love and growth. Carrie Ann said she sees joy every time Nancy dances. Len thinks she has a charm and naturalness about her, but did say he wanted to see some more hip action. Bruno agreed about the hips but liked the warmth of the routine.

Joe Amabile- 18 out of 30
This year has been Joe's most memorable because of the way two reality shows have changed his life. One, his association with the "Bachelor" nation. He met his girlfriend Kendall on "Bachelor in Paradise" and he said she helped him conquer his fear of relationships. The second is, of course, "Dancing With the Stars." With this show he faced another fear head-on and said he's learning you have to face things in order to master them. The judges thought Jenna's Viennese Waltz showed how much improved Joe is becoming but they want to see more.

The wrap-up and elimination at the end came swiftly. We learned Tinashe and Nancy were in jeopardy. But the facts were clear: it was Nancy's time to leave the ballroom.