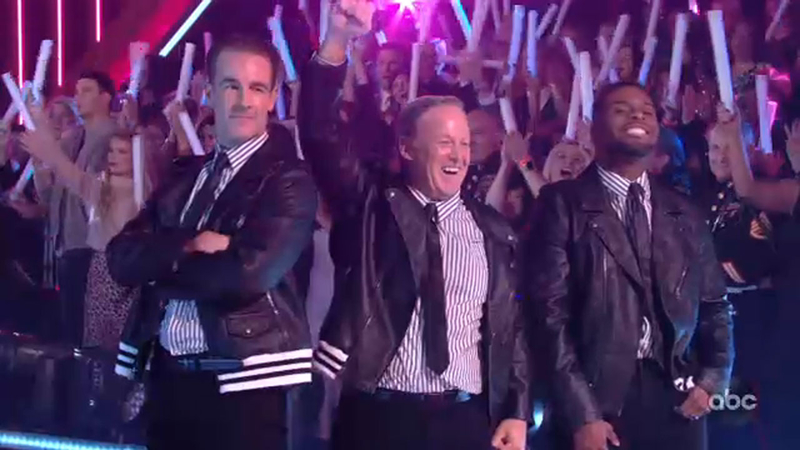 LOS ANGELES -- It was a night filled with performances on "Dancing with the Stars" since "girl groups" and "boy bands" got equal time on the show.

Each couple did two routines and those judge's scores were combined. Speaking of judges, former contestant Joey Fatone sat in to help critique the dances.

Ally Brooke- 40 out of 40; 40 out of 40 - 80 out of 80 total
Ally and Sasha's first routine was a Samba to the Spice Girls "Wanna Be." She admitted it was heartbreaking to have been in the bottom two and was going to work as hard as she could to make sure that didn't happen again. Head judge Len Goodman loved that the choreography was filled with recognizable steps and great technique. Carrie Ann Inaba called Ally and Sasha the "wonder twins" because they were flawlessly in sync. And Bruno Tonioli screamed that he wanted more! Their second dance was a Jazz routine to a new song from New Kids on the Block. Joey loved the storytelling in the choreography. Bruno said Ally reminded him of Paula Abdul. And Carrie Ann said it felt like this was already the finale!

Kel Mitchell- 34 out of 40; 40 out of 40 - 74 out of 80 total
Kel and Witney started out with a Paso Doble to the En Vogue classic "Free Your Mind." Bruno thought he unleashed an awesome power and was overwhelmed; Len was on the other end of the scale, and said there were too many gimmicks and not enough technical steps. Dance number two was a Viennese waltz to a Boys II Men song. Kel was worried because it had been a few weeks since he'd done a "slow dance" and the last time he did he ended up in the bottom two. No worry this time! The judges thought it was perfect, with Len saying it was a natural polished performance.

James got to Jive for his first dance to the Pointer Sisters song "I'm so Excited." And he was! He knows the bar has been set high and he's trying to maintain his strong presence. Joey said James makes it look effortless, and also praised his consistency. Carrie Ann thinks he exudes smoothness and finesse. James and Emma pull out the stops on a Jazz routine for their second dance, paying homage to judge Joey and his band N 'Sync and their biggest hit "Bye, Bye, Bye." Len and Bruno thought the dance could have had more partnering, but Joey disagreed and gave it a 10!

Hannah Brown- 32 out of 40; 39 out of 40- 71 out of 90 total
TLC's "No Scrubs" was dance number one and Hannah pulled out an old video of her dancing to it in the eighth grade. This time around she needs to do Alan's Salsa routine so it's a bit different from junior high. Bruno praised her confidence and how it keeps growing, although he did knock her for losing a little timing during the routine. Carrie Ann thought the dance was good, but not amazing, and at this stage of the game things need to be amazing. Or at least amazing adjacent. She pulled out all the stops for a Tango to a hit song from the current biggest group in the world, BTS. Joey thought it was the best dance of the night. Bruno called it pure undiluted pleasure that had the right mix of passion and elegance. Carrie Ann reminded her to bring her "A" game every time, and with this dance, she did.

Lauren Alaina- 34 out of 40; 36 out of 40- 70 out of 80 total
The first dance is a Quickstep to the Supremes hit "Can't Hurry Love." Lauren loves that she'll be performing the song of her former DWTS cast mate, and legend, Mary Wilson, and she does not want to mess it up. Joey liked Lauren and Gleb's energy, but warned them to watch their frame. Bruno thought they captured the joy of a timeless classic with a complex routine. Their second dance is on the opposite end of the spectrum with a Rumba. They're routine is to a Backstreet Boys song, "I Want it That Way", and Lauren's friend, AJ McLean from the band, stops by to offer moral support. Carrie Ann praised how far Lauren has come this season, and thought the dance was filled with confidence, vulnerability, power and artistic explosion.

Sean Spicer- 26 out of 40; 24 out of 40- 50 out of 80 total
Lindsay is still dealing with family issues so Jenna remains Sean's teacher. He wants to prove that he deserves to be here, and to thank those fans who've kept him here. They perform an Argentine Tango to a Destiny's Child song, and while Joey called in "stompy" he also let Sean know he's been in his dance shoes and knows how hard this is. Carrie Ann also told Sean she appreciates his effort but the artistry is missing. And Len did not mince words when he said the dance wasn't very long and that was the best thing about it. They attempted a Foxtrot for their second dance to a One Direction song. This time is was Bruno who called it "clumpy."

When it's time to learn who is safe we get the news: Ally, Kel, James and Hannah will return for the semi-finals. That leaves Lauren and Sean in jeopardy. Both Carrie Ann and Bruno vote to save Lauren and send Sean home.