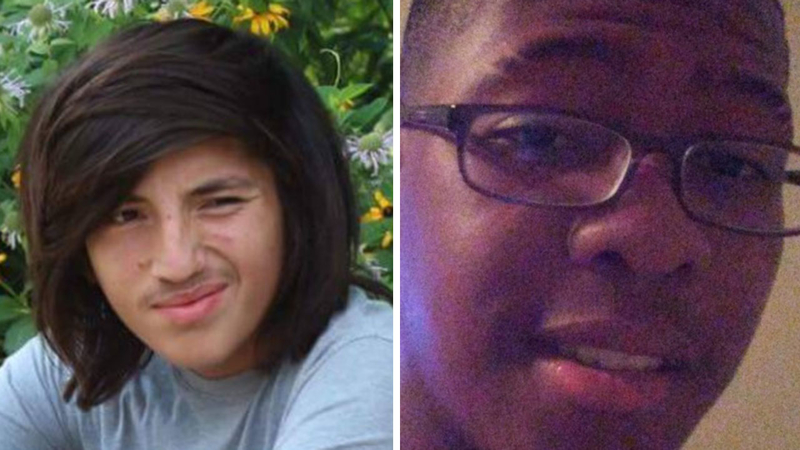 KATY, TX (KTRK) -- Counselors were on hand at Cypress Lakes High School, and the campus observed a moment of silence for two classmates who died in a weekend crash.

Troy Carroll and Reon Woodman, both 17, died after the car they were in was involved in a wreck. According to the police report, the driver of the car the students were traveling in failed to yield when making a left turn at the 7500 block of North Eldridge Parkway, and the students' vehicle was struck by oncoming traffic. Police said some of the teens were not wearing seat belts.

Shernel Woodman, Reon's sister, said their parents are struggling with the loss both emotionally and financially.

"This weekend was hard and I think it's only going to get harder when they see him," she said.

Shernel said the family is going to the funeral home Monday to make preparations, but with the unexpected loss, they are hoping for donations to help with the burial. They set up a GoFundMe account.

"Reon was really, really sweet. He was very quiet," Shernel said. "He wanted to become a veterinarian."

She said he often cared for pets in the neighborhood. When one dog showed up Sunday looking for Reon, it was too much for the grieving family.

"Seeing him come to the house was really hard, because they would be in the backyard playing. Reon would feed him. So, it was tough."

ABC13 has not been able to reach the family of Troy Carroll but school officials confirmed they too are trying to raise money for funeral expenses with a GoFundMe account.

Cypress-Fairbanks ISD released the following statement on the boys' deaths.

"We are deeply saddened to learn of the death of two Cypress Lakes High School students who were involved in an automobile accident. Our thoughts and prayers are with the families of these students and those who were injured. Additional counselors will be on campus as long as necessary to provide support for students and staff dealing with this tragedy."
Related topics:
katycypresscar accident
Copyright © 2022 KTRK-TV. All Rights Reserved.
TOP STORIES
We have a cold and damp night ahead
High school student attacked in his family's driveway in Richmond
Winter blast felt across Texas
Man killed in incident authorities believe stemmed from road rage
Major crash blocks southbound lanes of I-45 in The Woodlands
Alvin votes no on 'sanctuary city for the unborn' ordinance
Opening of adult store in Missouri City on hold after zoning issues
Show More
TxDOT crews prepared as temperatures continue to drop
Burglar caught on camera hitting luxury apartment building
Digging into the process of rebranding Sugar Land Skeeters
Adele postpones Vegas residency due to COVID among crew
Man killed during attempted robbery of woman he met online, HPD says
More TOP STORIES News