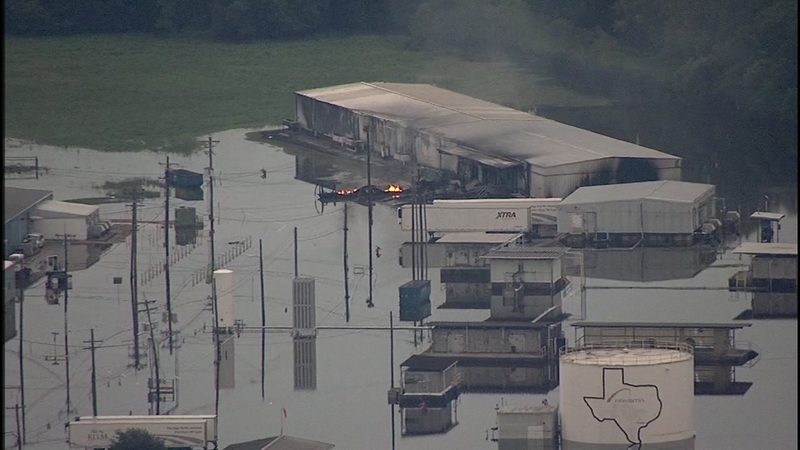 CROSBY, Texas (KTRK) -- Fifteen deputies were taken to the hospital as a precaution after an early morning incident at a flooded chemical plant in Crosby.

While the incident was initially reported as an explosion, Harris County emergency officials later said it was an anticipated chemical reaction caused by different organic peroxides being released. The reaction sent smoke billowing into the sky and produced flames that were visible from a helicopter, officials added.

Arkema, the company that operates the plant, said the chemical the deputies inhaled is "believed to be a non-toxic irritant."

Harris Co. Sheriff Ed Gonzalez said the deputies taken to the hospital experienced irritation in their eyes and throat.

"We use the comparison that it's like standing over a barbecue pit that emanates smoke and it gets in your eyes," he explained.

Thirteen of the deputies have already been released from the hospital. The others are still undergoing routine, precautionary tests.

"We don't believe there's any further threat, even to the broader community," Gonzales said.

Bob Royall with the Harris County Fire Marshal's Office said he plans to let the fire burn itself out as it poses no threat. Royall added that he expects similar burn-out incidents at the other units that lost refrigeration ability.

Earlier this week, officials evacuated workers and residents within a 1.5-mile radius from the plant after flooding which the company says could lead to a massive fire or explosion. On Thursday morning, members of the media were not let within a 2-mile perimeter of the plant as authorities investigated the incident, while nearby residents were briefly advised to shelter-in-place.

In a phone interview with ABC13, Congressman Ted Poe, whose district contains the Arkema plant, said he thinks the evacuation zone around the facility should be expanded.

"The folks in Crosby, if I were one of them, I would get as far away from the plant as possible because we really don't know what will happen in the future," Rep. Poe said.

The Texas Commission on Environmental Quality told ABC13 it was specifically concerned about the impact that smoke from the fire would have on people in surrounding areas.

"Smoke is a complex mixture of pollutants that can be irritating to the eyes, nose, and throat, that can decrease lung function, and the odors can cause headaches," the agency said in a statement. "The smoke from the fire is especially acrid and irritating. Those with heart problems or respiratory conditions, such as asthma or emphysema, may be particularly sensitive"

TCEQ recommended that residents limit exposure to smoke by staying indoors with doors and windows closed and running the air conditioning with fresh intake closed. Residents who must be outdoors should minimize heavy work or exercise in the vicinity of the smoke.

"Because the fire will be extinguished as soon as possible, there is minimal risk of long-term health problems," the agency added.

Arkema officials said Wednesday there was nothing they could do nothing to stop an impending chemical reaction. They described the situation as "serious."

The plant has been shut down since Friday in anticipation of Hurricane Harvey's landfall. The location received more than 40 inches of rainfall, leaving the site heavily flooded and without electricity since early Sunday morning.

Backup generators were inundated with water. A small ride-out crew of 11 people remained on site for the last few days, but by Tuesday afternoon, the decision to evacuate all personnel was made.

The company says refrigeration on some of the backup product storage containers has been compromised due to the extremely high water, which is unprecedented in the Crosby area.
Authorities are monitoring the temperature of each refrigeration container remotely.

Arkema manufactures organic peroxides at their Crosby plant. The product needs to be stored under controlled temperatures. The company has refused to specify what chemicals are involved and refused to respond to repeated requests for more information about the chemicals.

The company wouldn't or couldn't say specifically which chemicals are at the center of this incident. Some digging into records the company is required to file by law revealed a list of 19 chemicals they use or have used.

At least one of the chemicals has to be kept at a maximum of 50 degrees Fahrenheit or it can combust.