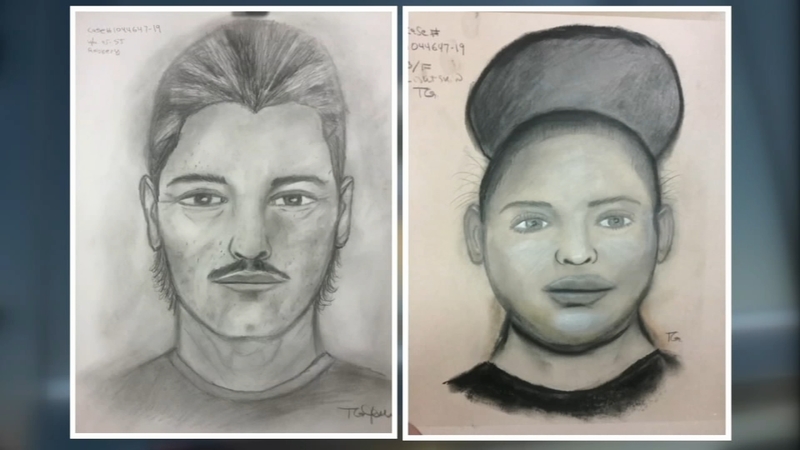 HOUSTON, TEXAS (KTRK) -- Police want your help finding a suspect who broke a car window and pointed a gun at a 13-year-old girl.

"Pointing the gun at a 13-year-old girl is really reprehensible," said the teen's mother, who we're not identifying and calling Elizabeth.

Elizabeth and her 11-year-old daughter ran inside the Walgreens at Eldridge and Briar Forest for no more than seven minutes. Her 13-year-old daughter was in the backseat of the SUV with the doors locked when the suspect's car pulled up.

"He tried to open the front door with the handle because I had unfortunately left my purse on the front seat," Elizabeth said.

The door was locked.

"When that didn't work he apparently reached into the backseat of his car, pulled out a handgun, broke out the back window with the butt of his gun," said Elizabeth. "When he saw my daughter, he was startled and then pointed the gun at her."

"He was close enough that she could smell him," Elizabeth said.

The teen called 911 and the man ran off.

Almost two months later, what happened that day haunts their family and they want justice.

The teen was able to describe him to a sketch artist.

He's described as a Hispanic male with a medium strong build and a pot belly. He's believed to be 45 to 55 years old. He stands about 5'10" and weighs around 200 lbs. The suspect has a mustache and graying black hair. He's described as having a pockmarked face with brown eyes. The 13-year-old says he has a Hispanic accent.

Police say he was armed with a black semi-automatic pistol.

Please RT: Do you recognize this man? He allegedly pointed a gun at a 13yo girl when he broke into a car at a Walgreens. Call @CrimeStopHOU if you have any information and hear from the girl’s mother at 10 on @abc13houston pic.twitter.com/V0TKgmOxVU

The woman is described as being white or Hispanic with black hair that was in a bun and green eyes. The 13-year-old says she was heavy set weighing more than 200 lbs.

If you know anything call Crime Stoppers at 713-222-TIPS. You could receive up to $5,000 for information leading to an arrest.