Police: 2 sought after man stuffs gun down his pants, walks out of store 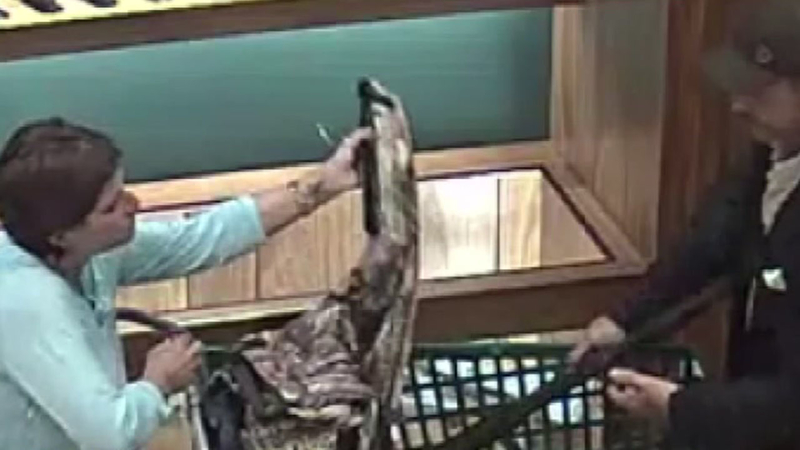 They say the duo went into a sporting goods store off the Katy Freeway on July 3 around 3:30pm, and took the gun when no one was looking.
Authorities say the woman distracted a cashier while the man used a key to pry up the top glass cover, reached into the showcase, and stuffed a blue steel Colt Python handgun into his pants. The gun is worth $3,000, according to police.

"They picked a Sunday where there would be low traffic and low employees in the store," said Sgt. Marvin Collins with Hedwig Village Police Department.

"All of the glass cases were glued except this one. And now it is," Collins said.

They left in a black Nissan Murano SUV.

Authorities say they don't think this is an inside job. Police say the man didn't use the key to unlock the glass case. He was checking the glass cases with his fingers and found the top of the glass wasn't glued down. He lifted it and got the gun, according to police.

Hedwig Village police say they've been speaking with other officers and found in League City that the same people appear to have stolen six or more guns from a Cabela's store.

"These guys are professionals. They've obviously done a lot more of this...a lot more in the Houston area. Maybe even through the state of Texas," Collins said.

He's not just guessing on that. Collins showed abc13 the proof: 16 photographs that show this same couple and another man stealing guns from the Cabela's in League City.

The department has four open cases against the thieves, alleging they stole five rifles by cutting wire that held them to the sporting good's store. These thefts happened from March to July.

Collins says Hedwig Village police is working with League City police to catch the crooks. He believes they're selling the guns on the street.

"If (you) see this couple, if they can match the pictures, notify police as soon as possible. So we can try to get them off the street and put an end to these gun thefts."
The male suspect is described as being approximately 50 to 60 years of age, a light black or Hispanic male with a thin build. Police say the suspect was wearing a blue, long-sleeve shirt, tan ball cap, with dark-colored jeans with patches on the legs.