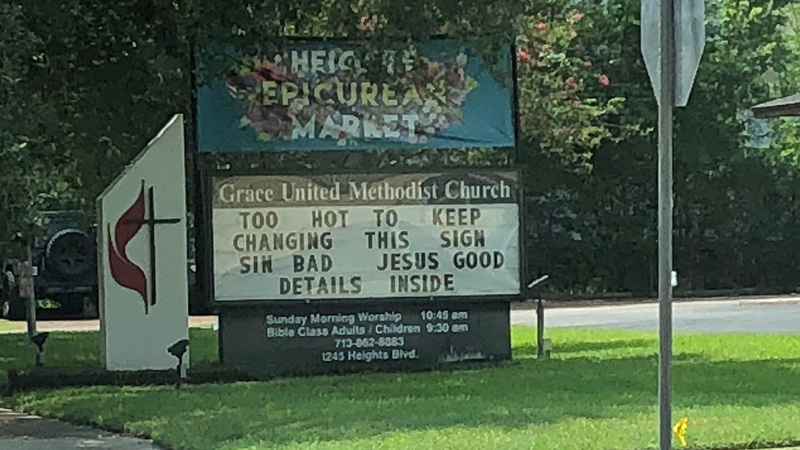 Creative church signs seen from different parts of the country

Church signs are the original tweets. Long before Twitter existed, churches have used their signs to post hilarious and inspiring short messages designed to grab your attention and hopefully bring you inside their doors.

The strong connection that exists between church signs and social media has become even more apparent, with one church using the popularity of a viral meme to bring younger crowds inside its doors.

Britt David Baptist Church in Columbus, Georgia, posted a sign outside of their church which reads: "Cash God inside howbow dah?"

The phrase is a play on a meme featuring 13-year-old Danielle Bregoli, who appeared last year on an episode of "The Dr. Phil Show" focusing on out-of-control teens. In the episode, Bregoli tells the audience "Cash me ousside, howbow dah" after they laugh at her behavior.

The statement, "Cash me ousside howbow dah" became an internet sensation and even inspired a bitmoji pun.

Alex Jones, 20, who is responsible for the signs at Britt David Baptist Church, seized on the moment.

"I saw it picking up steam," said Jones. "I just thought, 'How can I make it culturally relevant to a church sign?'"

The sign went viral and has been featured in national media outlets such as Buzzfeed and the New York Post.

"The response has mostly been positive," said Jones. "People think its funny."

The sign at Britt David Baptist is just one example of church creativity. Here are some other examples: