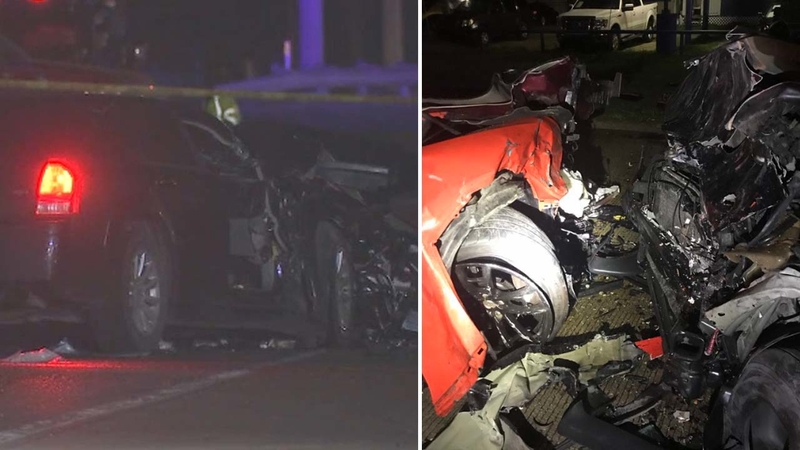 A couple was killed in a 6-vehicle crash after speeding in a Dodge Challenger Sunday night in northwest Harris County, officials say.

Deputies responded to a major crash at the 2900 block of W Mount Houston. Two individuals were pronounced deceased on scene. A third person was transported to Memorial Hermann Downtown in unknown condition. Traffic is being diverted at Breen road. #HouNews pic.twitter.com/1QLCTGAETU

Sheriff Ed Gonzalez said the driver, identified as Juan Molina, and his passenger, Yisel Rucoba, were in an orange 2017 Challenger speeding in an eastbound lane of W. Mount Houston when the Challenger changed lanes unsafely. It was hit by driver Lamberto Vazquez, who was heading eastbound in a gray 2016 Chrysler 200.

When Vazquez hit the Challenger, it spun into oncoming traffic, creating a chain-reaction crash.

The Challenger was then hit by a maroon 2008 Honda Accord going westbound on W. Mount Houston. A man named Joseph Farrell was in the maroon Accord, which rotated clockwise and was hit by a white Honda Accord carrying Ut-Em Pham and his passenger Hue Tran.

Saul Torres and his 12-year-old child were also traveling westbound in a black 2006 Chrysler 300 while driver Sarahi Ramos was in a black 2007 Nissan Xterra behind them.

Farrell's car continued spinning clockwise and was hit once by Ramos in the Xterra. Authorities say that as the Xterra hit Farrell's car, it also hit the Challenger, which spun again before being hit by Torres' vehicle.

Torres and his child had to be cut out of their car. They were taken with serious injuries to Memorial Hermann Hospital in the Texas Medical Center.

Molina and Rucoba died at the scene. Deputies believe the couple was married.

The Vehicular Crimes Division of the Harris County Sheriff's Office is investigating.

At-fault car, believed to be traveling at a high rate of speed, changing lanes. At least 6 cars involved. Both the driver & passenger of initial speeding car were pronounced deceased at the scene. Separately, a father & 12 yr old son in another car were transported by ambulance. https://t.co/FWAHgBAWgl

Devastating crash, speed is believed to be a contributing factor. Two deceased at the scene. Two transported to the hospital expected to survive their injuries. #HouNews https://t.co/NjrgpevdPX pic.twitter.com/33iSil59Yr