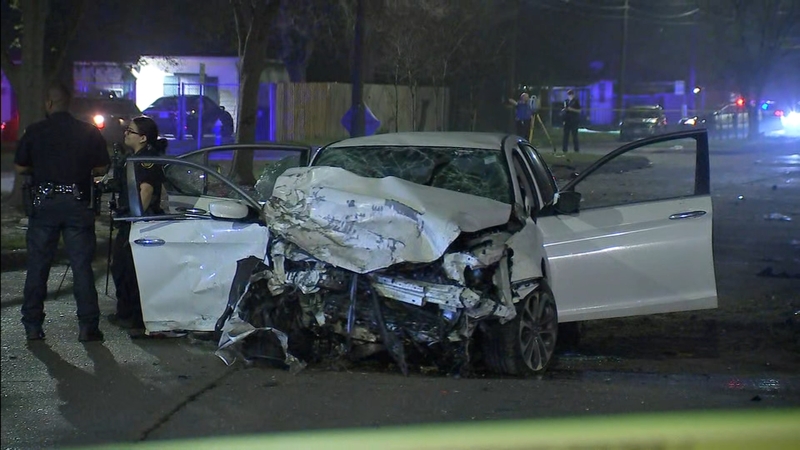 HOUSTON, Texas (KTRK) -- The owner of a stolen car used in a police chase led by two teens and a child says he was just trying to give them a ride home.

"I was in my car on my way home. They waved at me, came up and said, 'Can we get a ride?'" Umberto Alvarez said. "I gave a couple of boys a ride because they were a 45-minute walk away from home."

Alvarez then stopped at a corner store to get a drink, leaving the kids and his keys inside the car.

"When I came out, they were gone," Alvarez said. "You wouldn't expect them to steal your car."

This is what the victim says was his mistake while helping a group of young boys who stole his car.

Officers noticed the car and tried to pull it over but the boys sped off and led them on a chase down Scott Street. The chase reached speeds of more than 100 miles per hour.

The chase ended when the suspects in the white car slammed into an SUV that was pulling out on Scott Street from Zypher Street. The crash caused the SUV to roll onto its side and left it severely damaged.

Police say the three young suspects, believed to be 17, 16, and 9 years old, as well as the two victims in the SUV, were taken to the hospital.

Witnesses at the scene said they heard the white car speeding down the road moments before the crash.

"I heard one car. One car, that car was going about 90 to 100 miles an hour from this direction, into here," witness Joe Hamilton told ABC13.

Officials say the two people in the SUV suffered serious injuries and one of the juveniles was taken to a hospital in critical condition.

The driver of the stolen car is the least seriously injured of the five and faces charges on four counts of aggravated assault evading arrest, unlawful use of a motor vehicle and endangering a child, according to Sean Teare with the Harris County District Attorney's office.

"If (he) had stopped when the officer initiated a traffic stop, worst case he would be facing two years in state jail, but he is now facing up to 102 years in prison," Teare said.