'You saved my life:' Woman looking for 3 strangers who helped after crash 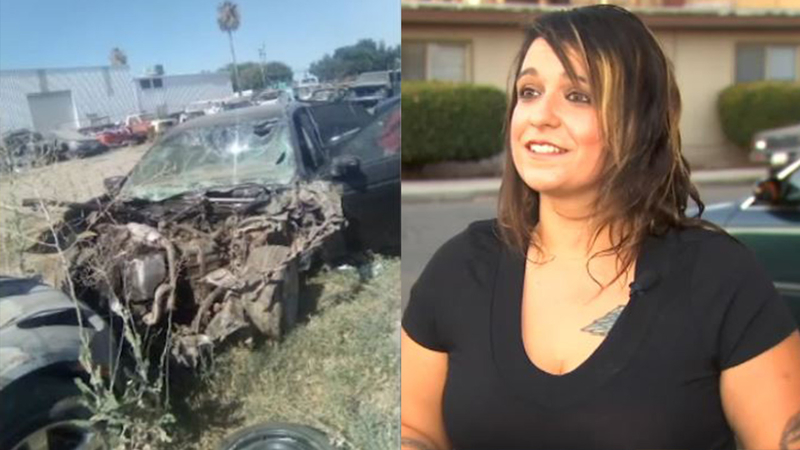 'You saved my life:' Woman looking for the 3 strangers who aided her after crash

FRESNO, California -- "I feel like she saved my life." That's all Brittany Mendonca remembers about one of the three strangers she says helped her during her worst hour.

"I literally thought I was going to die," she said.

On the night of July 6th, Mendonca was driving back to her home in Dos Palos, California.

As she approached an intersection, she somehow collided with a semi-truck head-on. "All I remember was seeing headlights," she said.

The impact crushed her car and sent the vehicle's engine flying several feet away.

Mendonca was inside, frantic, with her bones broken. "I saw my bone completely out of my arm and it was really intense. I took off running, screaming for help," she said.

She pleaded for help on the side of the road. Three people pulled over to help. One woman stayed by her side until she was airlifted.

"I was scared, I kept telling her, 'please don't let me die.' That's all I remember. I kept repeating it to her," Mendonca said.

All she remembers after that is waking up in the hospital.

Since then, her fractured tail bone has healed and her broken arm is on the mend. It's been a difficult recovery.

"I'm left-handed, so I had to teach myself how to write with my right hand. It has been real, real hard," she said.

Two months have passed since the crash, but not a day goes by she doesn't think about the strangers who came to her aid.

Since the crash, Mendonca has undergone two surgeries. She only has about two months or so left with her arm cast.

Mendonca says she hopes it's much sooner so she can shake her saviors' hands.

"Thank you, I feel like you saved my life," she said.

All that's left is to thank them in person.