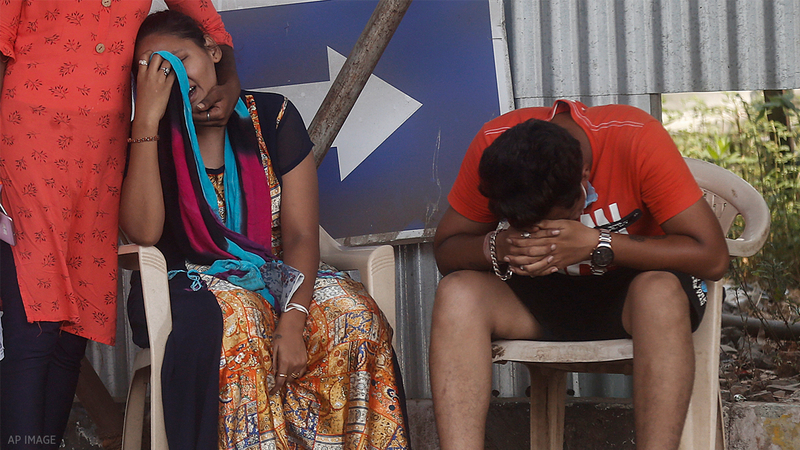 How the COVID surge in India is hitting close to home

HOUSTON, Texas (KTRK) -- The Houston area is home to hundreds of thousands of residents of Indian descent who have family and friends facing the massive COVID-19 surge in India first hand.

It's a tough situation to watch from afar, let alone live it day in and day out.

As the horrific images stream from India every day, and as between 300,000 and 400,000 new cases every day threaten to collapse the health care infrastructure, Deval Sanghavi said he's doing his best to help however he can.

READ MORE: Why number of COVID cases in India is exponentially higher than reported

"It is what you're seeing," he told ABC13 from Mumbai. "Except, it's living it in reality, and so many of us have family members or close friends who are in the hospital or even trying to get access to health care. All of us know people who have died."

Sanghavi is a native Houstonian who grew up in Sugar Land and works for a nonprofit that's working to get oxygen to those who need it.

There's not enough medical help for the nation's sick. India is a ripe target for COVID-19 with its densely populated urban centers, its poverty, and its lacking infrastructure for so much of the population.

"The lack of oxygen, nurses, hospital beds, [and] ICUs ...It is shocking to see what's happening around us," said Sanghavi.

But as India copes with this wave, is it the kind of thing we could see here in the United States again?

Eyewitness News took this question to Dr. Linda Yancey, an infectious disease expert at Memorial Hermann. She said vaccination rates are at play. India is at 10%.

"All of us are suffering from pandemic fatigue and India is no exception," she explained. "So people have been going back to business as usual. We have several things working for us. The most important one is that as of [Monday,] 44% of the country has received at least one dose of the vaccine. A third of the country, 100,000,000 people, are fully vaccinated. The vaccine is so important at preventing these catastrophic surges."

India has endured close to 20 million COVID-19 infections with nearly 400,000 in the last 24 hours. The government in India announced new measures Monday to tackle the surge. They include utilizing the Navy to provide hospital beds, transportation, and vaccinations as people continue to get sick at unprecedented levels.

Among those with family impacted is Houstonian Alpana Loyalka.

Her brother, who works as an airline pilot, got sick with COVID-19. He was quarantined at a hotel when his wife also fell ill and was hospitalized.

"The focus on my brother shifted to my sister-in-law, now to the little kids," Loyalka said. "There was a 10-year-old and an 8-year-old who were going to be alone at home."

For five days, the children were alone in their home without adult supervision.

"The neighbors pitched in," said Loyalka. "They started cooking food, put a table outside the house, left the food outside. They did a FaceTime to teach the kids how to sanitize the house."

Their parents' health are improving - both of them survived and their father is home, but the pandemic continues to rage in India. However, there are Houstonians who are helping. Among them is Kavita Tewari and SEWA International. They raised $7 million from 100,000 donors in a week to ship thousands of oxygenators and dozens of free ventilators to the Indian people through the UPS foundation.

"The shipment, once it reaches Delhi, is taken by Air India and it's sent to smaller airports in the vicinity and cities that are badly affected," said Tewari.

They are hopeful the surge is ebbing. As supplies and help pour in from around the world, they hope India can gain control and resume mass vaccinations on a larger scale. In the meantime, the group will continue to work to help their friends and family overseas -- one donation and one Zoom call at a time.