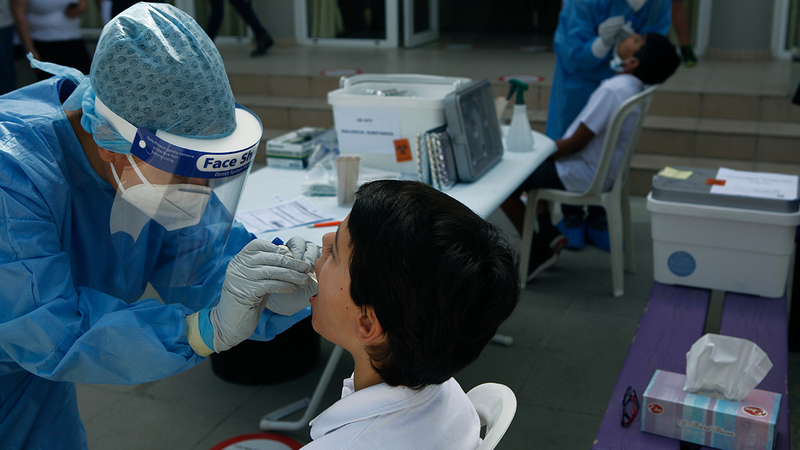 Last week, the number of COVID-19 cases in children in the US reached levels not seen since the winter surge. And with the return to school, the Delta variant on the rise and winter approaching, health officials are concerned it could get worse.

After a decline in early summer, child cases have increased exponentially -- with more than a four-fold increase in the past month, according to the latest report from the American Academy of Pediatrics and the Children's Hospital Association.

The rise has come as 48.4% of the population is yet to be fully vaccinated, according to data from the US Centers for Disease Control and Prevention (CDC), and as the average of daily new reported cases rises to more than 151,000.

COVID-19 vaccination rates in the U.S. hit a new six-week high as hospitals in several states are struggling.

Health experts have been particularly concerned about cases among children as students return to school, many without mask mandates and without access to vaccines.

Pfizer/BioNTech's vaccine was fully approved by the US Food and Drug Administration (FDA) Monday for Americans 16 and older, which National Institutes of Health Director Dr. Francis Collins told CNN was a "ray of sunshine in the midst of all these dark COVID clouds."

Similarly, Moderna announced on Wednesday it has completed its submission to the FDA for full approval of its COVID-19 vaccine for people age 18 and older. Moderna said it has requested priority review from the agency. Moderna's vaccine is currently available under emergency use authorization for people age 18 and older. The company began submitting data for approval to the FDA in June.

Still, children under 16 still aren't fully approved for a vaccine, and the emergency use authorizations in place only cover adolescents 12 and older.

But the process of authorizing a vaccine for that age group may not be completed until the end of the calendar year, US Surgeon General, Dr. Vivek Murthy, told CNN's Brianna Keilar.

The timing is a problem, Dr. Paul Offit, a member of the FDA's vaccines advisory committee, told CNN, because the more transmissible Delta variant is spreading and the cold dry weather of winter months makes it easier for the virus to spread -- all while children are sat together in classrooms.

"You are going to have a group of fully susceptible people all in one place," he told Jake Tapper. "That's not a good recipe."

And though it would be good to have vaccines for children before then, it is important for health officials to take their time in making sure the vaccines are tested heavily and deemed safe.

As cases rise among children, some school leaders are pressing for precautions while others are banning mask mandates.

Throughout Florida's 15 largest school districts, at least 11,851 students and 2,610 employees have tested positive for COVID-19, amounting to more than 14,461 confirmed cases since the school districts started keeping track of cases for the 2021-22 school year, according to a CNN analysis.

Florida Gov. Ron DeSantis has issued an executive order banning schools from instituting mask mandates, but eight counties have defied the order as cases have grown.

"Students with health conditions or disabilities that make them vulnerable to COVID have a right to attend school without endangering their health or safety. Schools who have children with these conditions have legal obligations under federal disability rights laws," Mizner said in an ACLU statement.

McMaster's spokesman Brian Symmes declined to specifically comment on the lawsuit, but said, "The only truly inclusive option is to allow every parent to decide whether their child will wear a mask in school."

On the other hand, the Los Angeles Unified School District has implemented strong mitigation measures and appears to have kept infection rates under 1% during the first week of classes.

The district, the second-largest in the country, enacted the measures throughout its more than 1,000 schools.

Teachers and employees in the district are required to be fully vaccinated by October 15. Masks are required for all students, staff and visitors. The district also has a "cohort" model in place, which aims to keep as many students in the same classroom with the same group of students as often as possible.

A rigorous and costly testing initiative has also been put into place. Every student and employee must undergo free weekly testing regardless of vaccination status in order to be able to enter a school.

Vaccines are less effective against Delta, but are still crucial

The spread of the Delta variant has impacted vaccine effectiveness, but vaccination is still a strong protector against illness, hospitalization and deaths, reports found.

According to a study published Tuesday by the CDC, once the Delta variant accounted for the majority of circulating virus, vaccine effectiveness against COVID-19 infection dropped from 91% to 66%.

"While we did see a reduction in the protection of the COVID-19 vaccine against the Delta variant, it's still two-thirds reduction of risk," lead author Ashley Fowlkes, an epidemiologist for CDC COVID-19 Emergency Response, told CNN Tuesday.

But a new study out of Los Angeles County reaffirms that fully vaccinated people are far less likely than unvaccinated people to be hospitalized, admitted to an intensive care unit, require mechanical ventilation or die from COVID-19

"On July 25, infection and hospitalization rates among unvaccinated persons were 4.9 and 29.2 times, respectively, those in fully vaccinated persons," researchers from the Los Angeles County Department of Public Health wrote in the study, which was published Tuesday by the CDC.

"It's still a very powerful vaccine," Fowlkes said, especially when it comes to more severe outcomes. "But we are also looking towards continuing to use masks for a little bit longer."

More vaccinations would better protect the public and prevent hospitals from potentially running out of staff or beds.

More than three-quarters (77%) of ICU beds in the US are currently in use and about 30% are for COVID-19 patients, according to data from the US Department of Health and Human Services. In six states -- Alabama, Arkansas, Florida, Georgia, Mississippi and Texas -- more than 90% of ICU beds are currently in use, and COVID-19 patients account for more than half of ICU patients in each of those states.

Overall, there are more than 98,500 COVID-19 hospitalizations, a total nearly 70% of the record high from January. And there are about 24,000 COVID patients in ICUs across the country, HHS data shows.