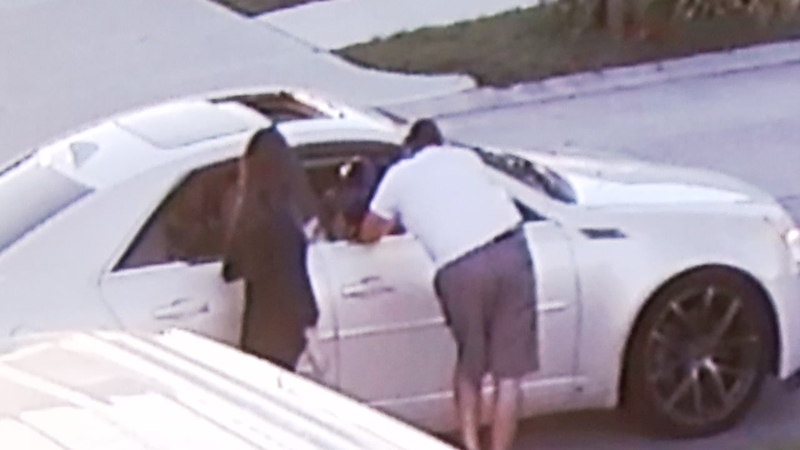 Officers say meeting at police stations could prevent you from becoming a robbery victim, like this mother of four.

The victim, who does not want to be identified, often used the OfferUp app to sell things like baby clothes, baby shoes and toys. On Monday, she used it for the last time.

She posted a radar detector and agreed to sell it for $150. The buyer was in front of her house within a few hours.

"It was him and a young lady and a baby in the back seat," the victim said.

She said the little boy was asleep. She and her husband were standing outside the buyer's white Cadillac making sure the radar detector worked and he talked her out of it.

"He said, 'Can I take a better look at it?' That's when I handed everything over and he sped off," the victim said.

Her security camera got a good shot of him and the car. She called Houston police and learned she was one of several victims that day. There was one robbery before hers and three afterward including one that happened at a Shell gas station on the Eastex Freeway.

That victim told Eyewitness News he met the same couple with a baby. They showed him a gun and took the iPhone he was selling. Then they sped off. He managed to get a short video of their car, the same white Cadillac.

The female victim posted what happened and pictures of the male robber on OfferUp as a warning. She's worried someone will eventually get hurt.

"Hopefully he's caught and she's caught. I was lucky someone up there was watching me," she said.

Anyone with information about the robbers or their vehicle is urged to contact Houston police or Crime Stoppers.

Report a typo to the ABC13 staff
Related topics:
kingwoodhoustoncrimetheftinternetsocial mediamobile app
Copyright © 2021 KTRK-TV. All Rights Reserved.
TOP STORIES
Federal investigators at site of MD-87 plane crash in Waller Co.
Big warm up ahead but another cool front in the forecast
Astros' late-game runs make ALCS a best-of-3 series
US expected to authorize Moderna, J&J boosters as soon as today
Free college proposal likely to be dropped from Biden's spending plan
White House details plan to roll out COVID vaccines for younger kids
Body found in fire's rubble had gunshot wounds, HFD says
Show More
5K run to be held in murdered woman's honor
How residents in this Harris County neighborhood became numb to crime
Nikolas Cruz pleaded guilty to murder in 2018 Parkland massacre
Houston executive 1 of 21 on board jet when it crashed in field
Americans arrested for trying to board flight in Switzerland
More TOP STORIES News