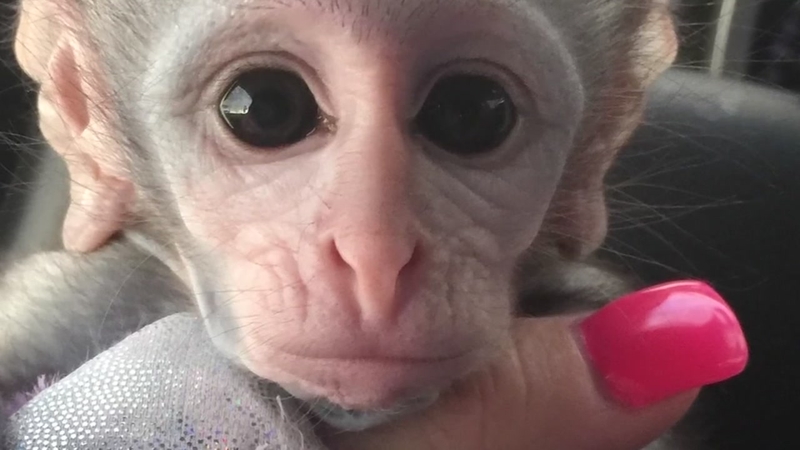 HOUSTON (KTRK) -- Police have launched a counterfeit money investigation after two baby monkeys were sold to someone here in Houston. The woman, who brought the vervets, or green monkeys, says the buyer paid her with phony money and she's now concerned about the animals' well-being.

"I don't feel like somebody that stole them and that lives that type of lifestyle is probably going to be taking very good care of them," Tracie Perry explained.

Perry is a licensed USDA breeder, broker and transporter, and she drove the monkeys to Houston from a licensed breeder in the Rio Grande Valley. She showed Eyewitness News the USDA paperwork signed by the buyer, who paid $6,750 for the two monkeys on July 31. However, when Perry stopped at a bank in Illinois on the way home on Aug. 3, she found out most of the cash was fake.

"[I was] kinda stunned and then everything happened so fast, I didn't have time to think until later," she said.

This Illinois police report shows how Perry received almost $6,000 of high-quality counterfeit cash. She was interviewed by police and federal investigators but she was not charged with a crime. Her case has been referred to the Secret Service.

Perry, who says the buyer's cell phone has since been disconnected, came back to Houston Monday while making another transport to try to find the buyer. But so far, no luck.

"We can't find her. We don't know if they're okay. It's just a frustrating circle going round and round trying to make sure that at least the monkeys are okay," she said.

Perry says the buyer had been talking to the breeder off and on for a year before making the purchase. She has not been charged with a crime, so Eyewitness News is not identifying her and attempts to reach her have been unsuccessful.
Related topics:
houstonmoneymonkeycounterfeit
Copyright © 2022 KTRK-TV. All Rights Reserved.
TOP STORIES
High School senior unenrolled while recovering from open heart surgery
3rd Ward residents fearful after mass shooting in Buffalo, NY
Houstonians worried about ERCOT's ability to meet demand this summer
Texas Attorney General tops runoff ballot
'He didn't deserve this': Boy had repeat head trauma before death
Baby formula maker Abbott says agreement reached to reopen plant
Data breach exposed personal information of 1.8M Texans, audit says
Show More
'On your knees': Video shows man point gun at roommate near downtown
Watson to meet with NFL officials in Texas this week, sources say
Lady Gaga invites Houston to The Chromatica Ball
Wildfire smoke brings haze but rain could wash it away this weekend
Man shot 7 times in cellphone store robbery in NE Houston
More TOP STORIES News