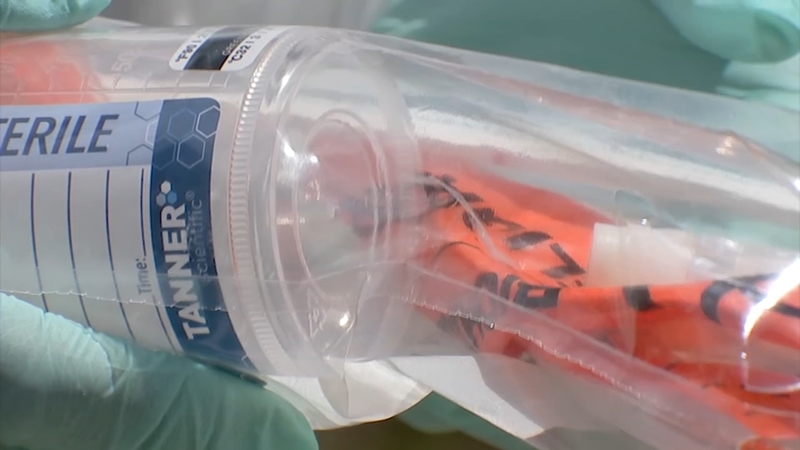 CONROE, Texas (KTRK) -- Texas Governor Greg Abbott pledges to increase testing by 10 percent every day in Texas, and promises testing supply chains are starting to loosen up, but a 13 Investigates analysis shows it's not showing up yet in many Houston-area counties.

It is most apparent in Montgomery County, north of Houston. The county received just 64 test kits from the State of Texas.

The state says its STAR system is only supposed to "augment local supplies." In this instance, local supplies from private companies are hard to get too.

The lack of county testing comes as Texas remains at the bottom of the list when it comes to the number of COVID-19 tests per capita. Last week, 13 Investigates reported that despite nearly 116,000 Texans being tested for the virus, the state still remains last in testing nationwide with only 3,660 tests per 1 million residents. About 94 percent of Texas' tests are done at private labs versus state testing.

Testing is ramping up at Conroe's Lone Star Family Health Center as supplies are finally coming in.

Karen Harwell, the CEO of the Health Center explained, "Prior to this week, we would request 200 (or) 250 (from our private supplier) and we would get five or 10."

This week, it is loosening up and the Health Center will expand testing to 100 per day with pre-registration, hopefully more.

This isn't just a problem for Montgomery County. 13 Investigates analyzed the level of COVID-19 testing in every Texas county, and it doesn't show good news for the Houston area.

The Houston metro has five of the 20 most populous Texas counties, but our analysis shows that none of them cracks the top 40 in testing per capita, according to state data.

13 Investigates analyzed the number of tests per capita across Texas counties. On the map below, lighter blues indicate fewer tests per 100,000 residents.
On mobile device? Click here for a full screen experience.


Montgomery County has done about as many tests as Wichita Falls, which sits in a county a fifth the size of Montgomery.

When told of the findings, Judge Keough said, "That would tell me that somebody in Wichita falls apparently has got some kind of connection with somebody that gives tests."

Wichita County officials say they pre-planned and got requests in early, but state data obtained by 13 Investigates on Wednesday shows something is out of place, despite having less than a quarter the population, Wichita Falls received 170 tests from the State of Texas. Montgomery County has so far received just 64. Another 72 were shipped Wednesday.

Keough said that the state told him, priority was given to areas with more positive tests. Without testing supplies though, Keough explained it was hard to prove that.

"It's kind of a no brainer isn't it? We need tests in order to be able to test, and that way we can show where we really are in terms of the need," he said.

Expanding the analysis, Wichita County has received more tests from the state than every Houston area county except Fort Bend (Harris County receives supplies from the federal government).

The lack of a state supply line, puts the burned on every county and every clinic to get its own supplies. "You have to be very innovative," CEO Harwell said. "It's very difficult."

Have a tip for Ted Oberg? A problem to solve? Get in touch with us on our tip page, or send a tip below. (On mobile? You can open our form by tapping here.)
Related topics:
conroemontgomery countyted oberg investigatescoronavirus testingcoronaviruscovid 19 pandemiccovid 19
Copyright © 2022 KTRK-TV. All Rights Reserved.
TED OBERG INVESTIGATES
Harvey victim finally gets help 1,600 days after the storm
Report: 'Significant reform' needed to improve state foster system
Feds: Slow Harvey aid, left 'Houstonians without the help they needed'
More than 20K HISD students in classes without certified teacher
TOP STORIES
We have a cold and damp night ahead
High school student attacked in his family's driveway in Richmond
Winter blast felt across Texas
Meat Loaf, 'Bat Out of Hell' rock superstar, dies at 74
Man killed in suspected road rage shooting on North Belt
Alvin votes no on 'sanctuary city for the unborn' ordinance
Opening of adult store in Missouri City on hold after zoning issues
Show More
TxDOT crews prepared as temperatures continue to drop
Burglar caught on camera hitting luxury apartment building
Digging into the process of rebranding Sugar Land Skeeters
Adele postpones Vegas residency due to COVID among crew
Man killed during attempted robbery of woman he met online, HPD says
More TOP STORIES News