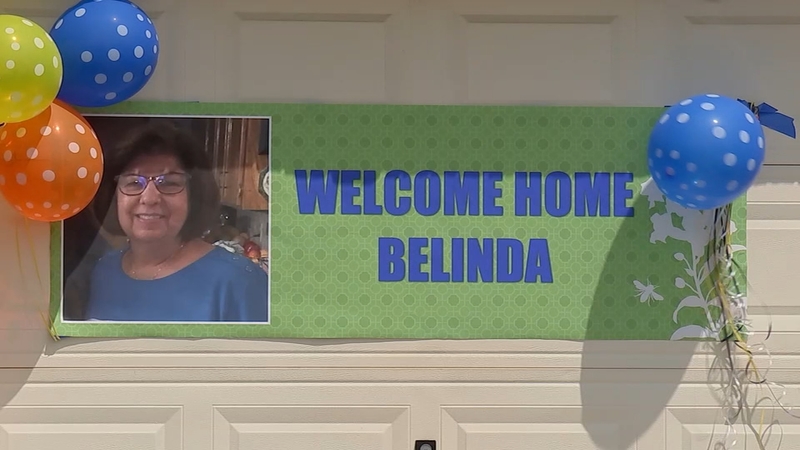 PEARLAND, Texas (KTRK) -- After nearly 60 days of fighting COVID-19, and on the brink of death, a Pearland woman is now healthy and home.

Belinda Galindo was welcomed home to a street filled with confetti and applause after her recovery.

HOMECOMING 🎉 After 58 days fighting & recovering from Coronavirus Belinda Galindo is finally home. This Pearland mother was on a ventilator for 6 weeks and hasn’t seen her family until today. ❤️ @abc13houston pic.twitter.com/WLDfqiD4L7

"We're looking at a miracle right here. Thank God, thank the doctors, thank everybody who prayed for us," said Galindo's son Marc.

Galindo was admitted to the Houston Methodist Hospital on March 24, and spent six weeks on a ventilator.

"We didn't get to see her all that time," said Galindo's husband Earnest.

Galindo and her husband were on a couples vacation in Egypt and Spain when they contracted the virus.

"That was the day they shut down Spain and everybody was trying to get out. Of course, at the airports, you were shoulder-to-shoulder, one-in-front, one-in-back, and coughing, talking and touching," said Earnest.

"(We're) Crying for two reasons - this isn't my dad's homecoming, but it is my aunt's. We were praying. I get choked up. Listen, out of four people that were extremely sick, to get three home safe is a beautiful thing," said Galindo's nephew Eric Quiroz.

"Love you dad. Miss you, and I'm just glad I still got my mom," said Quiroz.

The family is sharing their story to show the two sides of coronavirus - the happy homecomings amid a growing death toll.

They told ABC13 that they will continue to stay home and self quarantine even as the economy opens back up.

"It affects different people in different ways. Don't take it lightly. Take it seriously. Just because your neighbor got it and isn't sick doesn't mean you can't die from it," said Quiroz.