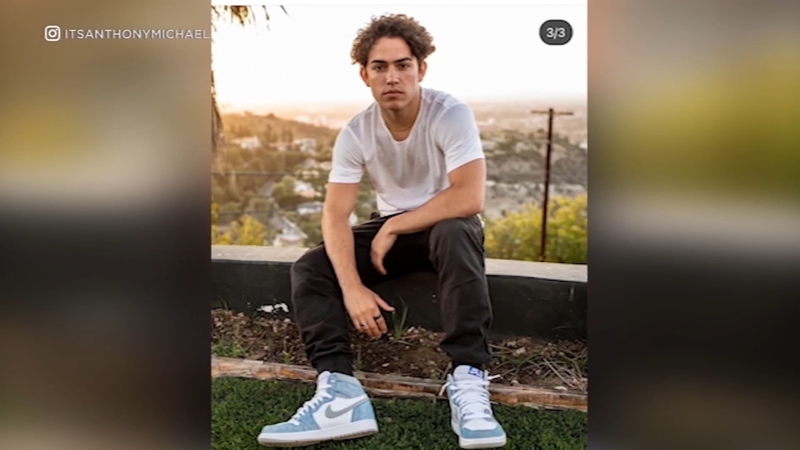 CALIFORNIA -- A 19-year-old man has died after being removed from life support Saturday, days after he and a friend were shot inside a Corona movie theater.

"The Corona Police Department has been notified that Anthony Barajas passed away early this morning," the agency said in a statement. "We extend our thoughts and condolences to his family and friends."

Barajas and Rylee Goodrich, 18, were found late Monday by theater employees after a 9:35 p.m. showing of "The Forever Purge." They had each been shot in the head, "execution style," sources told ABC7.

Goodrich died at the scene. Barajas was taken to a hospital, where he remained on life support until Saturday.

"I want to thank everyone who lifted Anthony in prayer," Malik Earnest, a friend of Barajas, said on Twitter. "The injuries to his brain were irreparable. July 30th at 11 p.m., Anthony was wheeled down an 'honor walk' where he would ultimately donate his organs so others may live."

Corona police detectives identified 20-year-old Joseph Jimenez as a suspect and arrested him Tuesday. Initially charged with murder and attempted murder, Jimenez appeared in Riverside County Superior Court Friday but didn't enter a plea and his arraignment was continued to next week.

After Barajas' death was announced, the Police Department said it was working with the Riverside County District Attorney's Office to add an additional count of first-degree murder against the defendant.

Vigils were held Friday in honor of the two victims, including an outpouring of emotion at New Beginnings Community Church in Norco where Goodrich was remembered.

Her heartbroken parents were joined by dozens of her friends. They shared memories of a kind, caring teenager who always wanted to make others happy.

"Everywhere you went, she lit up the room with her smile," said Alex Apatiga, a former high school classmate. "She was always nice to everybody."

Another large crowd attended a vigil for Barajas at Santa Ana's Mater Dei High School, where he was a standout soccer player. Barajas was a popular TikTok personality with more than 960,000 followers.

There was no known connection between the victims and the alleged gunman, authorities said.

"Based on the evidence provided to our office, this appears to be a random and unprovoked attack," the Riverside County District Attorney's Office said in a statement.

Jimenez's court appearance on Friday was marked by a dramatic verbal confrontation. After the hearing ended, the suspect was walking toward an exit and passed Goodrich's father, who yelled at him: "Hey, look at me, bro! Look at me! Look at me, dude! That was my ..." His voice trailed off as he sobbed and was comforted by a friend.

While searching Jimenez's home, police seized a firearm that "matched the caliber of the weapon used in the murder" and a wallet belonging to one of the victims, authorities said. Jimenez did have a movie ticket to "The Forever Purge" showing that the victims attended, investigators said.

Another vigil is expected to be held Saturday at the theater where the shooting occurred.