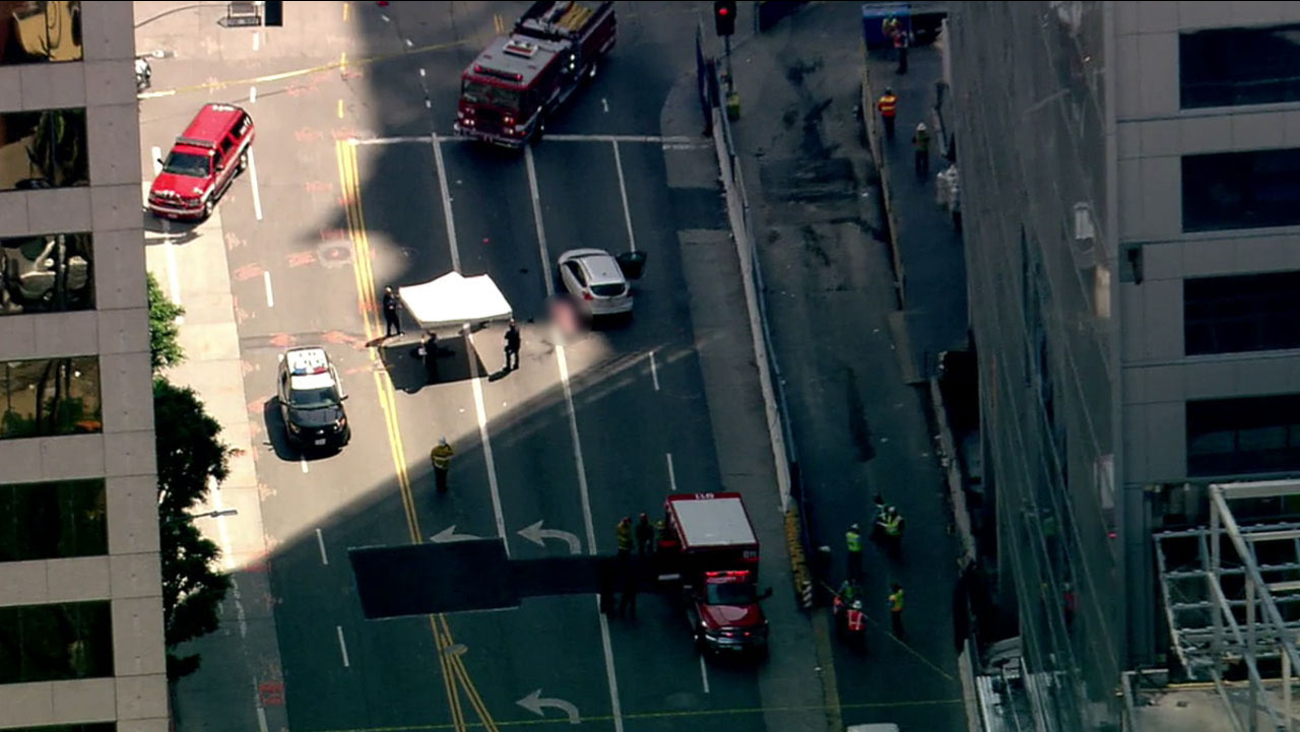 Emergency crews respond to the 600 block of S. Figueroa Street, where a construction worker died after falling from the Wilshire Grand Tower on March 17, 2016. (KABC)

LOS ANGELES, CA -- A construction worker died after he fell from the 53rd floor of a high-rise building in downtown Los Angeles on Thursday, fire officials said.

The man fell from the Wilshire Grand Tower in the 600 block of S. Figueroa Street around 12:30 p.m.

Authorities said the worker's body struck the back end of a moving car. The man, who officials said was an electrician, was pronounced dead at the scene.

The female driver of the vehicle was taken to the hospital for evaluation, but was not believed to have been injured during the incident.

"I'm still like struggling to comprehend what I've seen. I mean I understand it logically, but I'm still trying to process all of the emotions," eyewitness Robert Moran said.

"He was like actually three-quarters of the way down by the time I saw him. I just saw something kind of waving or flailing, something bright and orange, and I couldn't really see what it was because it was going too fast," Moran continued. "I then did a double-take and there was a body on the ground."

Officials were investigating what could have led to the electrician to fall from the building, which is soon to be the tallest building west of the Mississippi River.

All workers inside the building were supposed to be wearing harnesses that are tethered, project managers said. They stated there were also barricades around the exterior of the building to keep workers from approaching the edge.

It was the electricians second day on the job, according to officials.

Chris Martin, CEO of Martin Project Management - the company overseeing the construction project, said he's not aware of any job that requires a worker to be unharnessed and close to the edge of the building.

Martin called the worker's death a tragic situation and said he wouldn't make any other statement until the worker's family had been notified.

In a written statement, Turner Construction said the electrician's death was not work-related.

"We have confirmed with CalOSHA and LAPD that the incident which occurred at the Wilshire Grand project site today was not work-related. After an initial onsite investigation, Cal OSHA has confirmed that no fall-protection violations were observed."

Turner construction said the site would be closed on Friday and counselors were available for help people responded to the scene.