Violent brawl breaks out between school employee and student in hallway 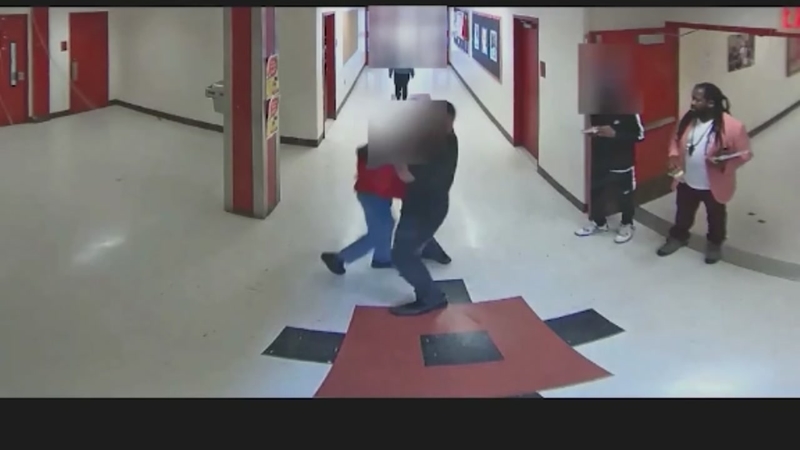 A Connecticut high school employee and a student on camera having a fight.

NEW HAVEN, Connecticut -- A longtime high school employee is being moved to another school after he allegedly pushed a student.

Surveillance video from inside the Connecticut school shows the student walking away as Frank Redente Jr. pushed him from behind.

The incident happened in May 2018.

An independent investigation was conducted because Redente is the son of A New Haven board member.

According to WTNH, the school district suspended Redente for 15 days without pay, and ordered him to attend anger management training.

Redente declined to talk, but released a written statement:

"I am a 24 year employee of NHPS, who was specifically requested to be assigned to Wilbur Cross High School because of my recognized ability to positively interact with at-risk youth who display challenging behaviors. On the day in question, I was escorting a young man to the office who was just involved in an altercation. There is a video of me pushing this youth and restraining him. I had explained during my interview, to no avail, that this push was done tactically to provide space between me and a young man with a history of aggressive behavior who had just struck me in the face at the bottom of the stairs. This was apparently not captured on video because the camera in the stairwell was not functioning.

The video and incident were thoroughly investigated by the Department of Children and Families, DCF concluded that my actions did not warrant substantiation of abuse or neglect. I have no explanation as to how or why the NHBOE could review the same set of facts and ascertain such a diametrically opposed opinion as to what transpired. At this time, both parties have reached a conclusion to this matter. The outcome was a settlement that allowed me to put an end to this nightmare and get on with my life and get back to work.

I have committed my professional career to the at-risk youth of New Haven. The health and safety of my students has always been my number one priority. As proud as I am of that career, I am more proud of the many young men and women who I've been able to mentor and guide to productive lives. Now that this situation has been resolved, I am completely focused once again on their health and well-being."