Spirit of Confederacy statue removed from Houston park after 112 years 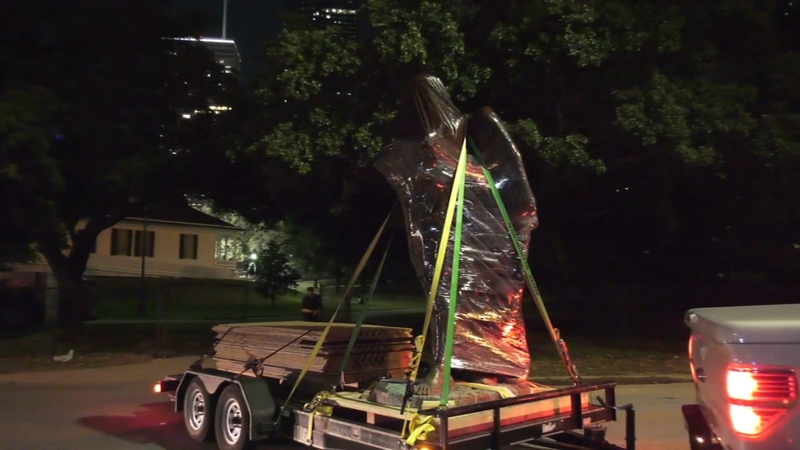 The removal is just one of two planned by the City of Houston, as they say it was important to have it removed by Friday, Juneteenth - which memorializes the day slaves in Texas were freed.

Mayor Sylvester Turner announced that the two Confederate statues in Houston will be moved to prevent vandalism and provide context.

The second statute scheduled for relocation is that of Richard W. "Dick" Dowling from Hermann Park. The mayor's spokesperson says the removal is moving forward as planned. However, ABC13 has learned plans are on hold for the Dowling statue to ultimately end up at the Sabine Pass battleground Historic Site.

The 'Spirit of Confederacy' monument will permanently be housed in the Houston Museum of African American Culture. The statue is something board president Cindy Miles says they welcome.

"How do we change the narrative so that we can get to the next level, which is to heal and to help us to be whole, you know, as a nation, also to make the conversation multicultural as well," Miles said. "It's not just one side, and, again, we've had events and exhibits in the past that have done that, again, around Sandra Bland, around the Jim Crow South. We've had exhibitions around cotton, and they're never comfortable. But part of our name, Houston Museum of African American Culture means that we have to be prepared to have events, exhibitions that are going to be uncomfortable."

The 'Spirit of the Confederacy' sat in the park for more than a century since its establishment in 1908.