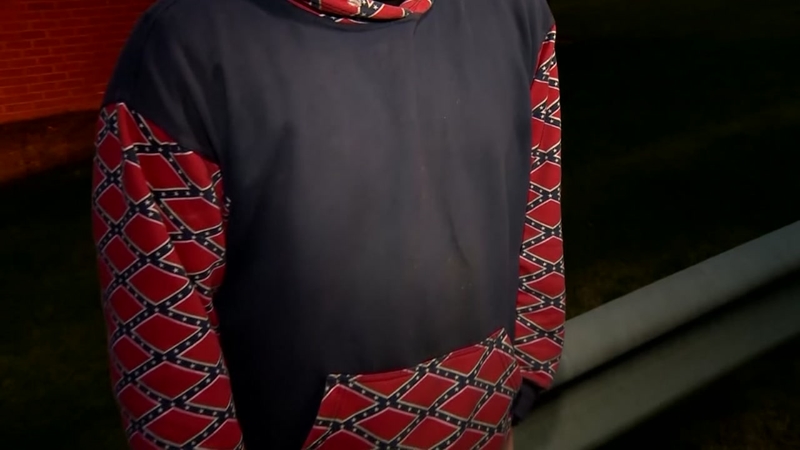 PLUM, PA (KTRK) -- One student's hoodie, which featured the Confederate flag in its design, got him suspended from his high school.

Noah Leech says he's worn the hoodie to class dozens of times, but this week, it prompted complaints, leading to his dismissal from school Friday.

"They basically told me I have to go home, and there is a possibility I may be expelled for wearing my hoodie to school," Leech said to WTAE.

The student says the flag isn't racist and instead represents his family's heritage.

"Our bloodline comes from West Virginia. They were helping move slaves from the South into the North under the Confederate flag, so that's what I stand for," Leech said.

Several students and parents see the issue differently, particularly since Leech's suspension caused others to drive cars draped with the Confederate flag through campus.

"I spoke with at least one parent who is considering transferring his kid out of the school district because he doesn't feel like his child is safe," one parent said.

One of Leech's classmates, Desiree Ulmer, says she wasn't offended by the hoodie but instead by students' response to the incident.

"I had no problem with the kid wearing it at first because I never see the kid. The kid never affected me in any type of way, but when more people decided to come to school wearing the Confederate flag, at that point, it was like, 'OK, this is getting a little too disrespectful for me,'" Ulmer said.

Leech says that in spite of his suspension, he won't stop wearing the hoodie.

"I'm sorry that I've ever offended anyone about it, but I'm going to continue to wear my hoodie and support what I support," he said.

The school district has gone back and forth on the issue in the past. Initially, they said Confederate flag clothing was okay but then decided to ban it.
Related topics:
societypennsylvaniaconfederate flag
Copyright © 2022 KTRK-TV. All Rights Reserved.
TOP STORIES
We have a cold and damp night ahead
High school student attacked in his family's driveway in Richmond
Winter blast felt across Texas
Man killed in incident authorities believe stemmed from road rage
Major crash blocks southbound lanes of I-45 in The Woodlands
Alvin votes no on 'sanctuary city for the unborn' ordinance
Opening of adult store in Missouri City on hold after zoning issues
Show More
TxDOT crews prepared as temperatures continue to drop
Burglar caught on camera hitting luxury apartment building
Digging into the process of rebranding Sugar Land Skeeters
Adele postpones Vegas residency due to COVID among crew
Man killed during attempted robbery of woman he met online, HPD says
More TOP STORIES News