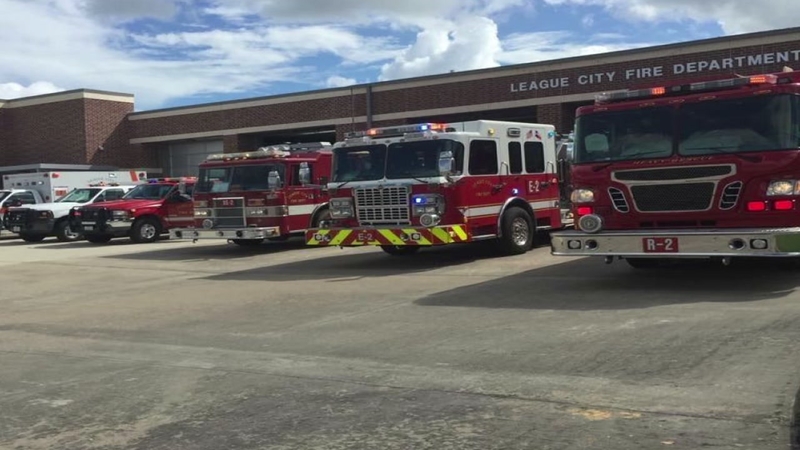 LEAGUE CITY, Texas -- Facing an ever-increasing volume of calls each year, a booming population and new subdivisions that will help the city grow, League City officials are pushing to recruit new members to its all-volunteer fire department.

The League City Fire Department relies on its approximately 120 volunteer members to respond to fires and other emergencies, but it needs more recruits to keep up with demand and maintain response times, especially considering a new fire station is about to be built, Chief Gary Warren said.

In February eight residents joined the department's annual academy, from which they are required to graduate to serve on the department. Warren hopes up to 20 join and graduate in early 2019, he said.

"We're about to have an explosive growth, and we need to be ready," he said.

Some newcomers might be concerned with a city of League City's size being serviced by a volunteer department, but according to Warren it is nothing to worry about. The department performs well, he said.

"I do hear some people that are new that find out that we're all-volunteer, and they have a preconceived notion that a city of 105,000 should have a paid fire department, but that's just because that's what they had where they came from, I believe. This fire department performs very well, so I think there might be a little bias in that area," Warren said. "We do have a long tradition of a fire department that performs at a very high level, and as long as the citizens don't have to pay ... I think they're happy to let them (remain volunteers)."

There are no plans to make the department a full-time organization. Instead department officials hope to recruit capable and willing residents who see the value in giving back.

Before the end of the year the League City Fire Department will break ground on Fire Station No. 6 at 7505 S. Shore Blvd.

The project is part of League City's dedication to maintaining or reducing emergency call response times as the city continues to grow. The number of League City residents is expected to increase by 10,000 to 15,000 within the next five years, said Sarah Greer Osborne, director of communications and media relations.

The department's average emergency response time in 2008 was 9 minutes 11 seconds. Despite city growth the average response time has improved to 7 minutes 40 seconds as of last year, according to city data.

Station No. 6 right now is temporarily housed in the base of an old water tower at 6060 S. Shore Blvd. The garage is barely big enough to hold one engine, and the location is too close to station No. 3 to properly respond to calls across the city, Warren said.

The new station will be built on the southeast part of League City near new subdivisions such as Mar Bella and Hidden Lakes. Station No. 3 was responding to calls in the area, but response times were too long, prompting the need for a new station, Warren said.

The temporary station No. 6 also has no beds, so during night shifts, the crew bunks at station No. 3, which makes things crammed and uncomfortable, Osborne said.

The new three-story station will have beds, three bays and a pole-the only League City Fire Department station to have one.

The station will cost about
$5.68 million. The League City City Council in August approved borrowing $11 million, part of which will fund the station.

The department is looking for new recruits to help respond to the swelling number of emergency calls, said District Captain Daniel Gibbs, who handles recruiting.

Part of the problem is cultural. Millennials do not volunteer as much as older generations, Gibbs said.

Gibbs' biggest academy class was 35 people, but the academy has a graduation rate of only about 50 percent. The department has not been adding enough new recruits to exceed the rate of volunteers falling off, he said.

The department holds events at schools and sets up booths at retail stores to try to get more firefighters to join, Gibbs said.

The League City Fire Department includes a fire chief, five fire marshals and about 45 paramedics, all of whom are paid. The rest of the department is made up of volunteers who respond from work, home and the station, day and night, Warren said.

Daniel Parada; his wife, Karrie Parada; and his stepson Tyler La Rocca all volunteer together. Daniel Parada always wanted to be a civil servant, and after he joined the department years ago, La Rocca and Karrie Parada eventually joined.

"It feels good to be helping someone during their worst day," Daniel Parada said.

From 8 a.m.-6 p.m. a small day crew mans a station and is the first to respond to emergency calls anywhere in the city. The crew members are volunteers but are paid a daily stipend of $100 for groceries, gas and other amenities, Warren said.

From 10 p.m.-6 a.m. members of a small crew are given an $80 stipend to sleep at one of the stations and respond to fire calls during the night, he said.

When a call comes in volunteers not at a station are alerted on a phone application called IamResponding. Those who can respond head to the nearest station, wait for enough other volunteers to show up and head out to the call, Warren said.

Sometimes Daniel Parada, Karrie Parada and La Rocca are the only ones besides the station crew who respond to a call. They hop onto an engine together and drive off to fight fires and respond to emergencies as a family. It has become a joke around the department that the Paradas should just park a fire engine in front of their home so the family can more quickly respond to calls, Daniel Parada said.

Volunteers are required to go to 12 trainings and respond to or stand by to respond to 120 calls a year. Those who reach the threshold remain in good standing, but every year there are a few volunteers who do not reach the goal. They are given a three-month suspension and then have the remainder of the year to get back into good standing, Warren said.

One disadvantage of a volunteer department is multiple calls can put a strain on available resources.

"What puts us in a bind is when we have two emergencies at the same time," Warren said. "It'll take a little bit longer to get there, but we'll cover everything."

Surrounding fire departments, such as those from Friendswood, Kemah and Webster, provide mutual aid to League City when it is overburdened, Warren said.

After 15 years a firefighter can retire and get a pension from the city that pays $1,000 a month or more. But besides that, low stipends and an annual bonus, volunteers go unpaid. They give up their valuable free time for reasons other than money, Warren said.

"They wanna feel needed, like they're really making differences," he said. "If they feel like if they don't go no one's gonna go, they feel needed."

Firefighters also feel a sense of glory and adventure responding to fire calls, and they get a sense of pride and status from holding leadership roles such as officer or captain, which they are elected to by their peers. On top of that, they enjoy the camaraderie, Warren said.

"These guys really get to like each other," he said. "They'd all do anything for each other."

Daniel Parada said he has noticed that sense of brotherhood, too, and he has become closer to his wife and stepson through volunteering with them.

League City is not alone in being a large municipality in the Greater Houston area with an all-volunteer fire department.

To the north, Pasadena, a city of 150,000, has a volunteer department of about 160 active members. Only a full-time chief and a part-time assistant chief are paid, Assistant Fire Chief Art Aleman said.

The city has plant and refinery workers, which makes it easier for residents to volunteer day and night, Aleman said. That is a bit harder to come by in League City, Warren said.

"We have a lot more white-collar workers here in League City," he said.

The League City Fire Department budget is about $2.64 million, which funds upkeep, equipment and other capital expenses. If the department had paid staff, the budget would quadruple, increasing city property taxes, Warren said.

Despite similarities to surrounding fire departments and the municipalities they serve, the League City Fire Department does not model itself after any other. Instead it continues to push for more volunteers as the population grows, the city continues to expand and the number of calls increases, Warren said.

"Times are changing," he said. "We gotta change with them."