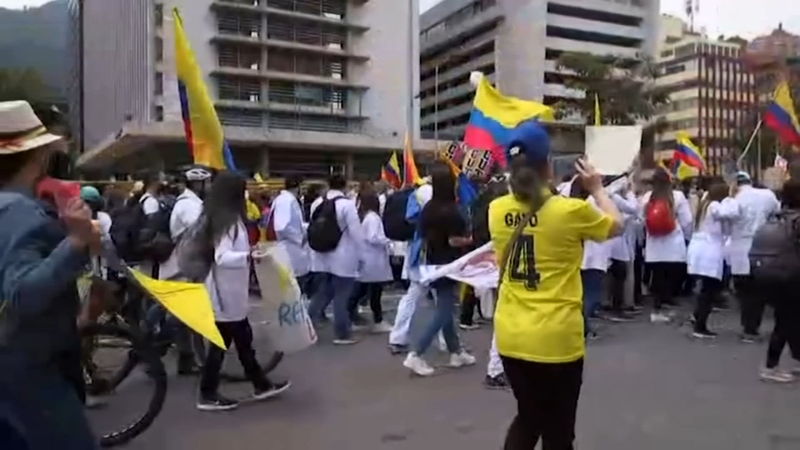 HOUSTON, Texas (KTRK) -- Diana Pareja has been getting updates on the situation in Colombia. Her relatives, who are in Medellin, say it's a nightmare for most.

"They are scared to go out," she said. "A lot of peaceful protests, but then also a lot of people taking advantage, also going on to the streets just robbing, setting things on fire."

ABC13 spoke with a relative and friend of Pareja in Colombia via Zoom on Thursday where the unrest has been constant for the last eight days. Food is now becoming scarce and overpriced.

Julian Jimenez, a teacher in a low-income neighborhood, said at night, the situation is frightening.

A lot of unrest happening in #Colombia right now!

I’m doing a story on the situation there because it’s important for everyone to see what is going on and why.

Stay tuned tonight at 10pm I spoke to people who live there in #Medellin #PrayForColombia #ColombiaAlertaRoja pic.twitter.com/lu7GWMxUMP

Eduardo Aleman, a political science professor at the University of Houston, said this all started after President Iván Duque Márquez proposed a tax reform in an attempt to help the country, which was hit hard by the pandemic.

"Ironically, the tax reform bill intended to increase revenue for government so it could spend on social programs to alleviate extreme poverty," said Aleman.

Low-income families said that tax plan would only hinder them, so people took to the streets to protest. The president has since withdrawn the tax reform, but demonstrations continue.

It's a mix of emotions for Garcia. He said he's heartbroken but also full of joy seeing his people stand up to the government.