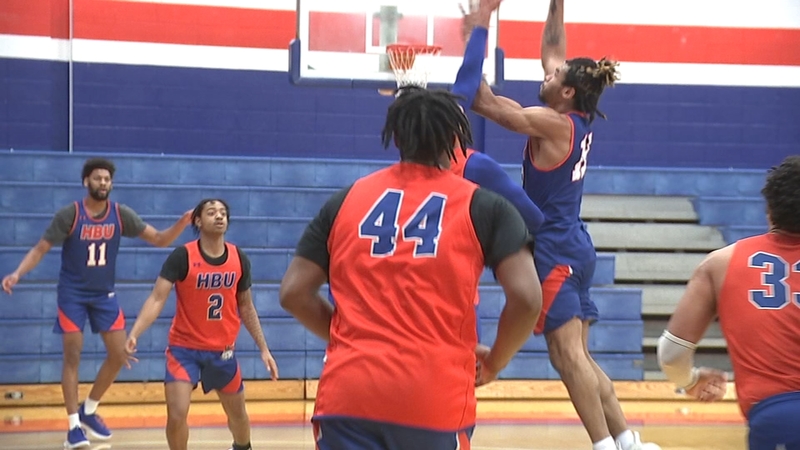 "A whole group of people have pulled this off and gotten us to the point we are now," Cottrell explained Wednesday.

Last month, Cottrell, the fifth-longest tenured coach in NCAA Division I men's basketball, won his 500th career game. All have come during his 31 seasons with HBU.

"It's a tribute to the administration," Cottrell noted. "And the support we've had from our fans, unbelievable assistant coaches, and the fact we've been able to have really, really good players here."

Five-hundred is a lot of games. "A lot of games" is not how to describe the schedule for Coach Cottrell's Huskies.

Due to COVID-19, HBU has played just once since Dec.11 - and that was Monday.

Starting Thursday, the Huskies are scheduled to play three games in three days as the Southland Conference hosts a one-of-a-kind in-season conference tournament at the Merrell Center in Katy.

The event will feature all eight of the league's teams.

Well, it's supposed to. The women's tip-off event, also slated for this week, was canceled due to COVID.

With 31 seasons and 500 wins, there's nothing to prepare Cottrell to coach in a pandemic.

"We do things we've never even thought about," Cottrell said of navigating the pandemic with his program. "Now you think about who rooms with who on the road because who's had COVID and who hasn't, and who sits where on the bus. All we're doing right now, as coaches, is trying to protect them and doing everything we can to put them in a place where they can get on the court and compete."

Because in this era, it takes small victories off the court to earn big victories on it - and eventually big, round numbers.