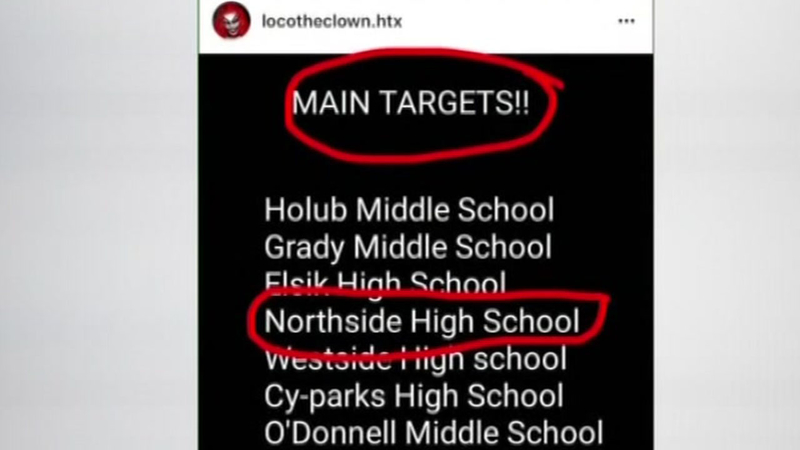 HOUSTON (KTRK) -- The clown-related threats that's been dominating a certain corner of social media has spread to Houston-area schools. Early Friday, Houston ISD sent out voice alerts to parents of several schools talking about a threat that the district determined was non-credible.

Students at Westside High School eagerly read some of the Instagram and Twitter posts to Eyewitness News.

"We'll be at all high schools this Friday either to kidnap students or teachers going to their cars," read student Sydney Freeman, who added she's not that concerned. "I think it's just like an early Halloween joke. I know October starts tomorrow. I think people are just playing around."

Clowns in America: Timeline of scares and sightings
A summer of sightings is stoking fears after several clown-related threats, robberies and close encounters involving children

The clown based threats have been spreading across the country in recent weeks, leading to school closures, worried parents and arrests. In the Houston-area, other school district, like Alief ISD, also sent out letters to parents.

Moms who are not on social media on a regular basis were caught off guard by the threats.

Group of clowns allegedly terrorize drivers in the street

"I don't have any clue yet here, like what's going on here, that really scares me," said Paula Saoma, whose son is in his first-year of classes at Tanglewood Middle School.