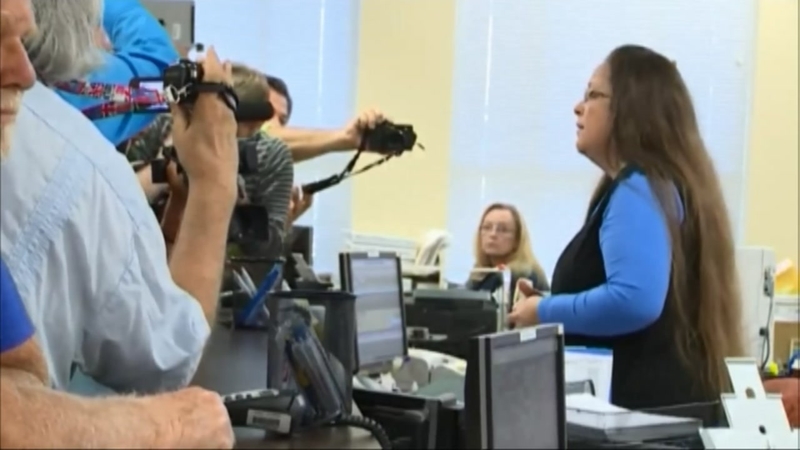 ASHLAND, KY -- A federal judge ordered a defiant county clerk to jail for contempt Thursday after she insisted that it would violate her conscience to follow court orders to issue marriage licenses to gay couples.

Rowan County clerk Kim Davis and her deputy clerks were summoned to appear before U.S. District Judge David Bunning after she repeatedly denied them marriage licenses, cited her religious beliefs and "God's authority."

"You can't be separated from something that's in your heart and in your soul," Davis told the judge as she explained how the Supreme Court's ruling legalizing gay marriage nationwide conflicts with the vows she made when she became a born-again Christian.

"I promised to love Him with all my heart, mind and soul because I wanted to make heaven my home," Davis said.

The judge said she left him with no alternative but to jail her, since fines alone would not serve to change her mind. She was escorted out of his courtroom by a deputy, although not in handcuffs, to be turned over to the custody of federal marshals.

The judge also told all five of her deputy clerks that they are free to issue licenses to all applicants, and also face fines or jail if they refuse to comply. He gave them a chance to meet with lawyers before returning to his courtroom to reveal their decisions.

The lawyer for Davis, whose defense is funded by the Liberty Counsel, a religious freedom group, argued that the deputy clerks can only issue licenses under Davis' authority, but the judge overruled this objection.

Hundreds of people chanted and screamed, "Love won! Love won!" as word of these decisions reached the crowds outside the federal courthouse.

Kim Davis testified about 20 minutes and was very emotional. She described how she became a Christian and said she is unable to believe anything else.

April Miller, one of the women trying to obtain a license, also testified. She said she voted for Kim Davis in the election and that this was only about getting her license, not about trying to change Davis' beliefs.

In front of the federal courthouse, demonstrators shouted at each other, sang hymns and waved signs, which ranged from the violent - turn to Jesus or burn - to simple statements of support. A small plane flew over the courthouse, carrying a banner that said: "Stand Firm Kim."

Davis stopped issuing licenses to all couples in June after the U.S. Supreme Court effectively legalized gay marriage. Despite rulings against her, she's turned away couples again and again.

The couples who originally sued in the case asked Bunning to punish Davis with fines but not jail time.

Davis, an Apostolic Christian, said earlier this week she never imagined this day would come.

"I have no animosity toward anyone and harbor no ill will. To me this has never been a gay or lesbian issue. It is about marriage and God's word," her statement said.

Her critics mock this moral stand, noting that Davis is on her fourth husband after being divorced three times.

Davis served as her mother's deputy in the clerk's office for 27 years before she was elected as a Democrat to succeed her mother in November. Davis' own son is on the staff.

As an elected official, she can be removed only if the Legislature impeaches her, which is unlikely in a deeply conservative state.

Judge Bunning is the son of Jim Bunning, the Hall of Fame pitcher for the Detroit Tigers and Philadelphia Phillies who served two terms as Kentucky's junior U.S. Senator. Former Republican President George W. Bush nominated David Bunning for a lifetime position as a federal judge in 2001 when he was just 35 years old, halfway through his dad's first term in the Senate.

But Bunning has been anything but a sure thing for conservative causes. In 2007, he was part of a three-judge panel on a federal appeals court that overturned Michigan's ban on partial-birth abortion. The panel ruled the state's law was too broad and would outlaw other legal forms of abortion.

In 2003, Bunning ordered the Boyd County School District to allow the student club Gay-Straight Alliance to meet on campus.