'It was either him or me': Security guard feared for his safety in shooting at teen, grazing 6-year-old girl 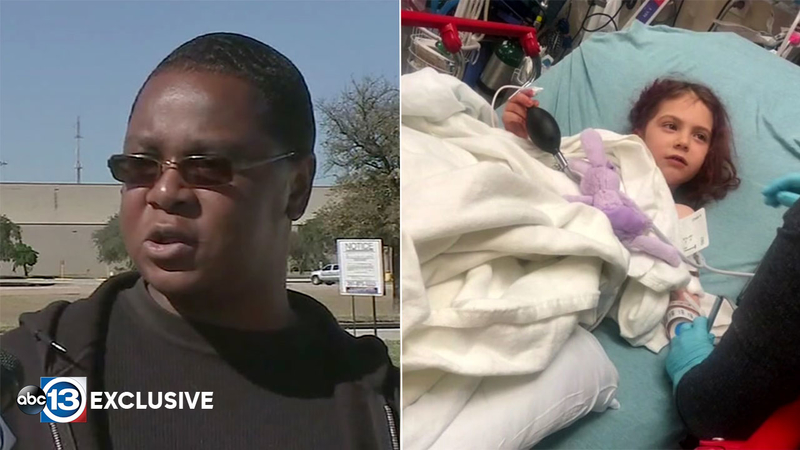 HOUSTON, Texas (KTRK) -- A security guard, who opened fire at a robbery suspect but hit a 6-year-old girl, told ABC13 that he thought the person he aimed for was pulling a gun when he reached in his pocket.

Christopher Bradley spoke only to Eyewitness News on Friday after he was charged with aggravated assault.

Authorities said his stray bullet grazed 6-year-old Claire Tidwell outside of a T-Mobile store. The girl, who was hospitalized and later released, was waiting in a vehicle in the drive-thru of a nearby McDonald's.

"Once he jumped back, I jumped back, and there he go tryna hurry up and take it out his pocket," Bradley recalled. "So it was either gonna be him or me, so I had no choice."

He estimated he fired five or six shots.

Christopher Bradley telling ABC13 he feared for his safety while chasing teen robbery suspect. One of his shots, though, struck a 6-year-old girl.

Meanwhile, the family of 18-year-old Ernest Hudson, who was Bradley's target, wants the security guard charged with attempted murder, insisting the teen was not armed and he was not stealing.

"This off-duty quote-unquote 'robo cop' security guard, when he shot Mr. Hudson, this young 18-year-old fell to the ground and he continued to shoot him like you should shoot a dog," said community activist Quannel X, who spoke outside the store Friday on behalf of the teen's family.

Hudson remains in the hospital, and his family says he may not survive his wounds.

BACK AT HOME: Little Claire Tidwell will continue with physical therapy while using a walker to get around.