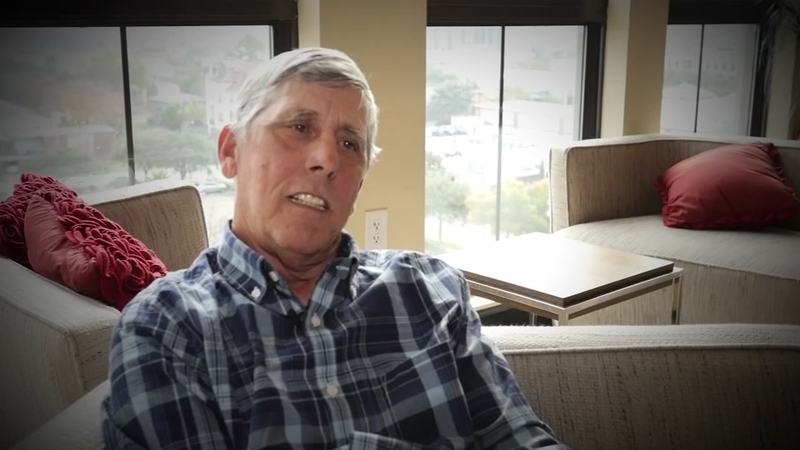 HOUSTON (KTRK) -- It's not every day that someone gets a second chance in life. That's exactly what happened to one man who received a Christmas gift that ultimately got him off the streets.

Sean Salisbury calls Russell Bersett his friend. They discuss everything from sports to politics. One look and you would think they are Felix and Oscar.

"We become kind of like the odd couple I guess," Salisbury said.

Christmas Day marked the one year anniversary of when their journey began. Salisbury was driving home after visiting with his children.

"About a half hour outside of Dallas, walking down I-45 with a big old duffle bag was Russell," Salisbury said.

Bersett had been living on the streets for nearly 25 years. He was having a difficult time digging out from "rock bottom." So he began walking south from St. Louis in search of a warmer climate.

"Drugs, alcohol, no direction, and when you hit the skids, it takes a long time for it to stop," Bersett said.

When Salisbury initially saw Bersett he drove past him, but something told him to turn back.

"I stopped for a second and said, 'Where are you headed?' He says Katy, Texas, and I said, 'Come on in,'" Salisbury tells us.

Salisbury initially checked his new friend into a hotel for a night. However, days later, Bersett was staying at his home with the intention of finding a job in Katy. Those plans changed.

"As I got to know him, I realized he just needed a break and he got one," said Salisbury. "He's turned into a trusted friend."

Bersett does chores around the home to contribute. His goal is to land a job and get back on his feet. In order to get a job, he needs proper identification. He was able to obtain a copy of his birth certificate. But for a man who has been out of the system for 25 years, other documents have been difficult to obtain.

"The birth certificate isn't any good," said Bersett. "The lady says that just shows you were born. It doesn't mean you're alive."

Eventually, he received a Social Security card, but there were other challenges.

"I go to the DMV thinking I got a birth certificate and Social Security card. Needed more ID, I needed a receipt, or bank account," said Bersett.

It's been a long road for the two men, but progress had been made. Along the way, Salsberry even found a dentist to give Bersett a new smile.

"It's been a hell of a run for the past year," said Salisbury. "The greatest lesson I learned is the face of homelessness is not what you think it is."