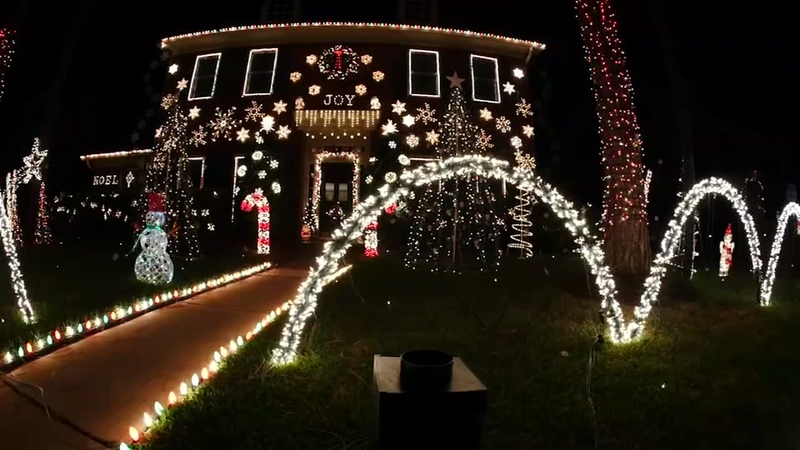 HOUSTON (KTRK) -- 'Tis the season to deck the halls and string up the lights. But Don Franck has been preparing his Christmas display all year long. In fact, some say his show is the hottest one in town.

He has a separate breaker devoted to the show at his home in the 15000 block of Viney Creek Drive.

With over 150,000 twinkling lights, and thousands upon thousands of feet of electrical cord, Franck started his over-the-top tradition less than 10 years ago. Since then, it has grown by leaps and bounds.

Franck and his wife began stringing up the lights mid-October. During Thanksgiving week, they flipped the switch. When the sun goes down, it's show time.

Franck's dazzling display dances to 17 music tracks and it's controlled by 276 separate channels. Each one is programmed from scratch.

From these 20-foot shooting star towers, spiraling Christmas trees -- even the reindeer grazing on the lawn -- each zone is synchronized and controlled by his computer control room.

Neighbor, Denise Watson says "Every year they add more. I look forward to coming and also bring friends who come to my house to see it."

Music light displays have become popular over the years. So to step up his game, Franck added something different.

It's a wow factor everyone is talking about.

These twin fire cannons shoot about 10 feet into the air. They're not programmed to go off with every song in Franck's library, but when they do, it's a sight to see.

The price tag to run everything is not as expensive as you'd think. Franck tells us it's about $75 more on his electricity bill.

Now the fuel canisters do add up quickly. Franck says they run about 5 times as much as the electric bill. But he doesn't mind at all.

He says, "When you see the kids and see their faces light up, it makes it all worth it."
Related topics:
hobbies & interestshoustonchristmas
Copyright © 2021 KTRK-TV. All Rights Reserved.
TOP STORIES
What you need to know about Astros tickets, events before World Series
Can authorities prove if Brian Laundrie killed Gabby Petito?
Yordan Alvarez returns from double knee surgery to win ALCS MVP
Baldwin was told gun was 'cold' before movie set shooting
Astros head to World Series after ALCS win over Boston
Houston Astros on pace for record beer year
'Bobby Dynamite' helps chug the Astros towards ALCS title
Show More
Don't get stuck in these traffic closures this weekend
Salami sticks linked to new salmonella outbreak
20-year-old shot to death during break-in of Conroe home, police say
Arrest made in case of Alvin abduction, sexual assault of a minor
Rain chances increase this afternoon
More TOP STORIES News