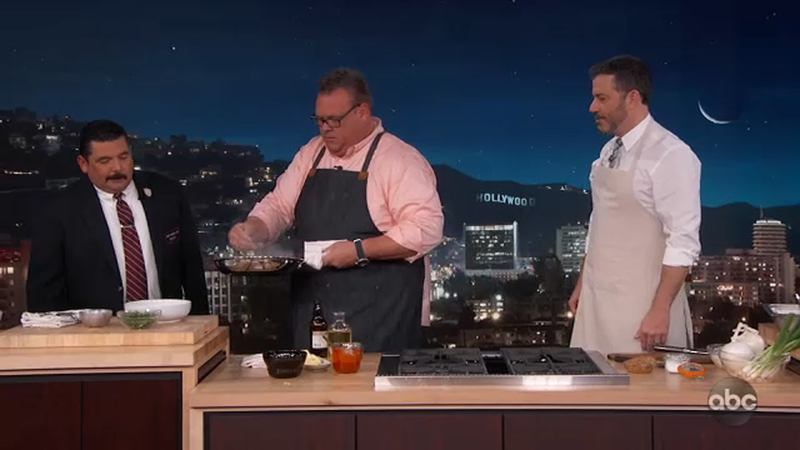 HOUSTON, Texas (KTRK) -- Chris Shepherd went from Houston to Hollywood. The James Beard Award winner prepared his signature Korean braised goat and dumplings on Tuesday's episode of "Jimmy Kimmel Live!" in between appearances by actor Henry Cavill and a performance by Beck.

"It's not something you do every day," Shepherd said in an interview with ABC13 just hours before the show aired.


The chef tells CultureMap that his relationship with Kimmel goes back several years. Connected by mutual friends, Shepherd served the goat and dumplings at Kimmel's Emmy after-party. Since then, Kimmel has supported the Southern Smoke Foundation by offering backstage access as a silent auction item at the annual festival.

When it comes to the goat and dumplings, Shepherd said Kimmel's team picked it over three other dishes.

"It's what we've made our name on for a very long time so it's perfect. It's the perfect dish to show Houston off," he said.

When it came time to promote his recently released cookbook, "Cook Like a Local," his team reached out to Kimmel's producer Doug DeLuca about coming on the show. Although Shepherd has been on TV before, his appearance on Kimmel was his first time on a national talk show.
"It's exciting. Am I nervous? Yes, but it's an experience that brings light to Houston. Hopefully, we get to talk a little about that."

Shepherd was excited not only to promote his book, but to also represent the Houston food scene on such a large platform.
"Houstonians are such beautiful people and so supportive, and it's just nice to talk about our food scene on an actual stage like this. It's going to be really nice," he gushed.