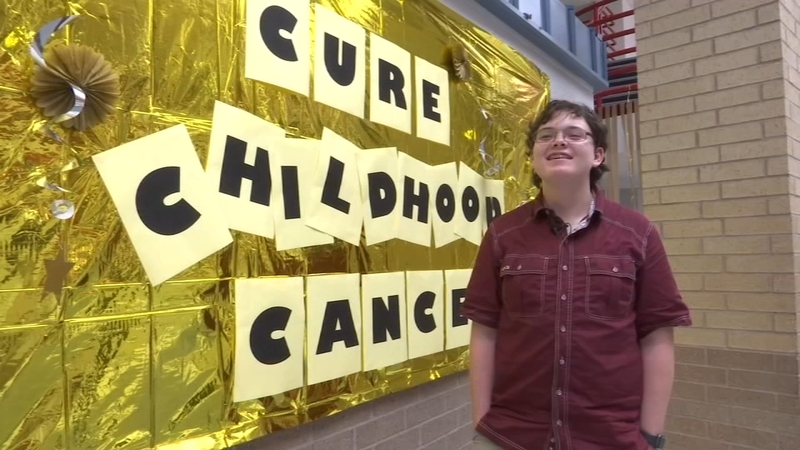 SUGAR LAND, Texas (KTRK) -- September is Childhood Cancer Awareness month, and one Fort Bend ISD student is sharing his story to educate others about what it's like to receive a life-changing diagnosis at such a young age.

"I'm excited to get to see my friends again," said 17-year-old Justin Stout. "I can't be too excited school is starting."

Stout has started his senior year at Stephen F. Austin High School and has his sights set on Texas A&M University, a vision that didn't seem possible just three and a half years ago.

"At the time, it was kind of cloudy about what my future would be," he said.

The hallways of his school are lined in gold decorations and signs that read "Cure childhood cancer."

Just a few years ago, Justin was in the fight of his life while his classmates were going to school.

"I was diagnosed with ALL leukemia and I also went into liver failure," Justin said.

Acute lymphoblastic leukemia, according to the National Cancer Institute, is a type of cancer in which the bone marrow makes too many immature lymphocytes, a type of white blood cell.

In March 2015, Justin fell ill while on a family vacation. His parents, at the time, knew they needed to get him to a doctor, but did not know the severity of their son's condition.

Justin was just 13 at the time.

His mom, Tami, says it was nearly impossible to get him on the donor list.

"He was put on a transplant list and when they found the leukemia, he was taken off and so, he was going to die without the liver," she said.

Doctors at Texas Children's Medical Center pushed hard to get Justin back on a donor list and eventually, there was a match. Justin got a new liver, but then had to begin chemotherapy. He now receives monthly follow ups to ensure he stays healthy.

Tami wrote a letter to the superintendent expressing the need for understanding and support for families like theirs because so many children are still being diagnosed.

"To anyone that's going through the exact same situation, get through those moments," Justin said. "There's always a light at the end of the tunnel."