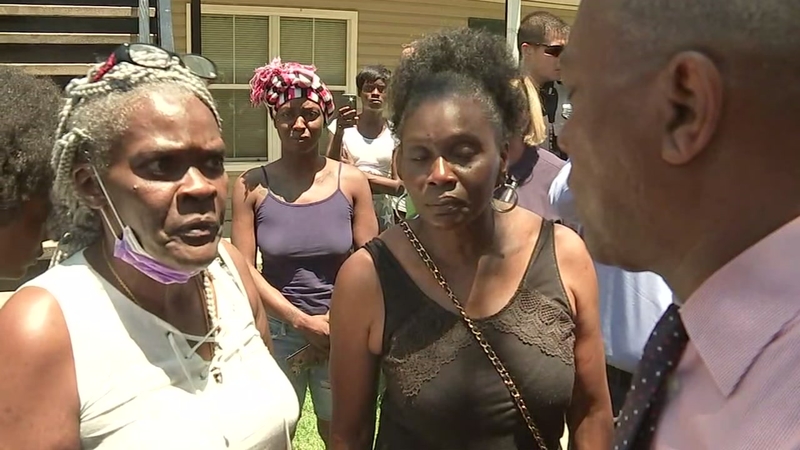 HOUSTON, Texas (KTRK) -- A brawl between two groups of men at a Sunnyside apartment complex ended in a shooting that injured a 3-year-old child.

On Wednesday, Mayor Turner and HPD Chief Art Acevedo visited the area and made a plea for the community to come forward.

"If you know anything, you have to help us out," Turner said.

Houston police say officers were already patrolling at the King's Row apartment complex in the 4100 block of Barberry when gunshots rang out just after 9:30 p.m. Tuesday.

As officers ran towards the gunfire, investigators said a bullet went through a window and struck 3-year-old Sir Romeo Milam who was inside his family's apartment.

The child is still at Texas Children's Hospital in critical condition. According to a family member, doctors are concerned that Sir Romeo may not be able to walk again.

Turner added that he's not going to allow gang violence to take over the streets of Houston.

We urge the #Sunnyside and neighbors in Kings Row complex to come forward. Anyone w/ info in this case is urged to call HPD Major Assaults Unit at 713-308-3600 or @CrimeStopHOU 713-222-TIPS more info here https://t.co/qMwL6i0Ull pic.twitter.com/0BkP5eXDH0

"I don't want any crime to exist in the city but when it involves our children, it just takes it to another level," Turner said.

Earlier, Sir Romeo's family called on Turner to clean up the complex.

"Mayor Turner, Mayor Sylvester Turner, can you do something about these apartments so that little kids don't have to be looking at the TV and end up with a bullet through them?" said Loriann Milam, the victim's grandmother.