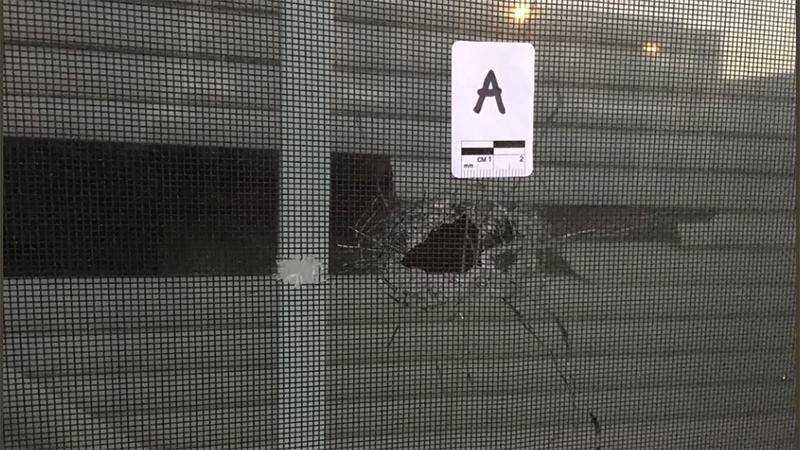 HOUSTON, Texas (KTRK) -- A grandmother is calling for change after her 4-year-old grandson was hit by a stray bullet inside his own home in southeast Houston.

Eyewitness News reporter Jeff Ehling is outside the apartment where a 4-year-old was shot.

This happened at the King's Row apartment complex in the 4100 block of Barberry just after 9:30 p.m. Tuesday.

Houston police were already at the complex patrolling when they say two groups of men got into a fight in the courtyard.

As the brawl was ending, someone pulled out a gun and started shooting.

One of those bullets flew into an apartment where the boy was watching TV.

7 bullet holes in 5 different apartments after a shoot out at the Kings Row apartment complex. A year 4 year old was hit in the cross fire.
We also found a bullet casing on the second floor walkway. pic.twitter.com/yCXTRPBSLK

The child was hit in the abdomen. He was taken to Texas Children's Hospital in critical condition but has since improved. He is expected to be OK.

His family is now calling on Houston Mayor Sylvester Turner to clean up the complex, which is in a high-crime area.

"Mayor Turner, Mayor Sylvester Turner, can you do something about these apartments so that little kids don't have to be looking at the TV and end up with a bullet through them?" said Loriann Milam, the victim's grandmother.

The mayor's office responded, saying in part: "Earlier this year, Mayor Turner allocated more than $1 million to the Houston Police Department's overtime budget to focus on combating crime in neighborhoods. ... However, the mayor has also stressed that neither he nor the police chief can be everywhere, all the time. Mayor Turner has encouraged citizens to fight crime in their neighborhoods by reporting criminal activity especially when they know someone - including a family member, neighbor or friend is potentially violent and committing other criminal activity. Mayor Turner is putting manpower and extra hours on the street and has not reduced the HPD budget during the city's need to tighten its financial belt, but he believes everyone, including himself as mayor, is responsible for stopping senseless crime."

"I'm mad at this, at anybody who had anything to do with this. I am mad at this. Because it is not right. That is a kid, I want the mayor to step up and do something about crap like this. There has to be something that can be done. How many more little kids are going to get shot?" Milam added.

Officers say the child's mom and his other siblings were inside the home when the child was shot.

At last check, police said no one has been arrested.

Houston police are investigating after a 4-year-old boy was shot at an apartment complex in a high-crime area.