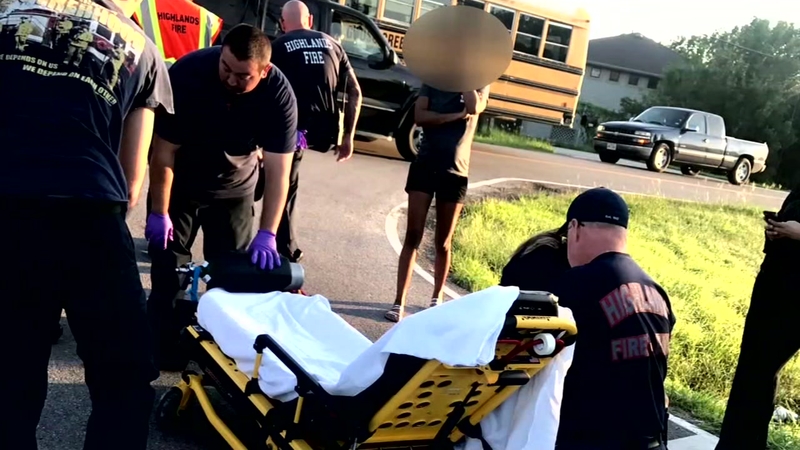 HOUSTON, Texas (KTRK) -- More than a month after a Goose Creek CISD student was hit by a driver while trying to board her school bus, the student's family has just learned the driver involved was never ticketed.

"She was crossing the street and a lady driving a dark blue SUV didn't stop for the bus, and hit her," said the student's stepfather Jose Flores.

The junior at Goose Creek Memorial High School was crossing the street at Wallisville Road and Hasty Lane.

Goose Creek CISD's communications director confirmed there is video from inside the bus, showing the school bus was stopped with flashing lights activated and the stop sign engaged.

The family says the other driver never stopped, even though the bus driver repeatedly honked the horn.

"You can see where the bus driver was honking the horn and screaming, and then when Tiffany got hit," Flores said.

Eyewitness News learned that the Harris County Sheriff's Office was not aware of the video, and only requested it after ABC13 informed their media office about it. Goose Creek CISD would not release the video to media.

Flores says the impact of the crash was so hard that the teen's shoes flew off, landing behind the bus.

"Her whole left side was in pain, from her leg, to her hip, to her neck," said Flores.

Deputies responded to the scene, but the driver was not ticketed for hitting a pedestrian or for running a school bus stop sign.

"To find out she wasn't given a ticket is just appalling. It's absurd," said Flores.

Eyewitness News tried to get answers from HCSO, but they tell us the report is not finalized and they can't give us an explanation.

"Everyone passes buses here all the time, and they're going to keep passing buses because no one is giving tickets," Flores said.