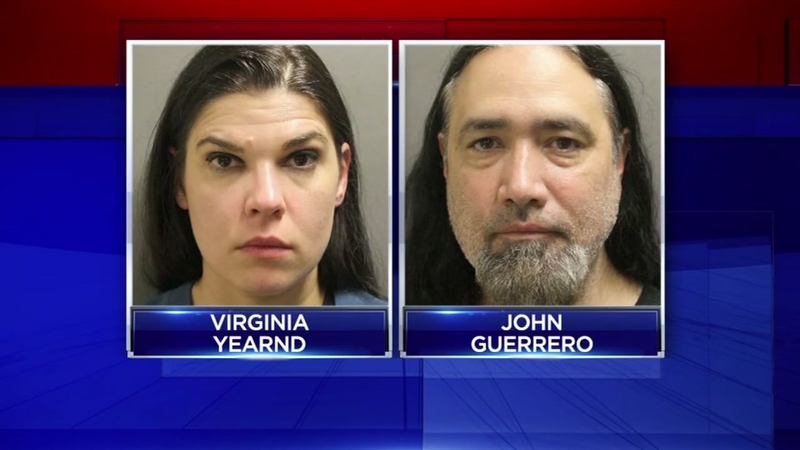 SPRING, Texas (KTRK) -- A couple is charged after authorities say they left their 11-year-old daughter alone at a home in Spring for a day and a half while they traveled to a concert in Detroit.

John Michael Guerrero, Jr. and Virginia Yearnd are both charged with child endangerment.

On Aug. 23, authorities say the child's great aunt called deputies after speaking to the girl on the phone, who then told her she was home alone.

The girl said that her parents left the day before, on Aug. 22, to go to Detroit to see the band Godflesh.

When deputies went to the house, they found the child cooking food on the stove. She told officials that she tried to call her parents but only got their voicemail.

Deputies say they tried to call her parents for over an hour. Guerrero never answered or returned a phone call.

Yearnd later called back and told deputies she was in Louisiana.

According to court documents, she later admitted to being in Detroit for the show and claimed that her sister was supposed to check on her daughter.

However, the girl told deputies that no one told her to call the sister and she didn't have any information on who to contact if she needed anything, court records show.

She told authorities this wasn't the first time she was left alone. She also didn't expect her parents to return until midnight on Aug. 24.

On Tuesday, the couple went before a judge who allowed them custody of the child but ordered that they have supervision. The couple also cannot have any contact with other children.

A neighbor, who didn't want to be identified, told ABC13 that they were both good parents, "I know them as good parents, very hard working, he travels, his job is to go set up concerts so I'm sure that he was working and not just going to a rock concert."
Report a correction or typo
Related topics:
springconcertchild abandonedchild endangerment
Copyright © 2022 KTRK-TV. All Rights Reserved.
TOP STORIES
Timeline breaks down Uvalde shooter's movements day of massacre
16-year-old airlifted to hospital after being shot, deputies say
Warming quickly after our coolest morning in nearly a month
Onlookers urged police to charge into TX school: 'Go in there!'
Protests planned against NRA meeting following Uvalde deadly shooting
3 dead in apparent murder-suicide in NW Harris Co., sheriff says
TX school shooting leaves at least 19 children, 2 adults dead
Show More
Here's what to know about NRA meeting in Houston
Uvalde school shooting: What we know about 19 kids, 2 teachers killed
Beto O'Rourke confronts Texas gov. at Uvalde shooting press conference
Houston mayor after shooting in Uvalde: 'Our values are messed up'
HISD staff encourage talking with kids about Uvalde tragedy
More TOP STORIES News