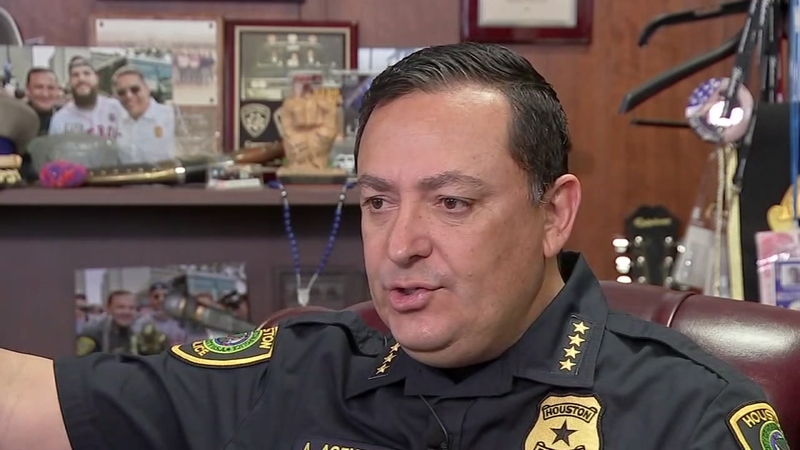 HOUSTON, Texas (KTRK) -- He spent most of his law enforcement career in California but always had his eyes set on Houston.

"I'm part of a city that represents a picture of what America is going to look like in 5, 10, 15 years," said Houston Police Chief Art Acevedo.

Chief Acevedo, who was born in Cuba, told Eyewitness News he's proud to be leading this city. In fact, he's the first Hispanic HPD chief and he's well aware of the issues the Bayou City is facing.

"We live in a city that we know has 20,000 documented gang member," Acevedo said. "A good number of them are committing crimes, they are people doing home invasion robberies, shooting at people, doing carjackings, they are not going to pull over, okay."

That is one reason why last month, the chief announced his officers were now going to use a new tactic to stop police chases called the pit maneuver.

While some frowned upon it, Chief Acevedo stood his ground and said already his men have successfully ended two chases using "the pit."

WATCH: What Acevedo hopes to accomplish in 2018

Art Acevedo is sharing his plans for policing Houston in 2018.

However, backtracking to the days when all eyes were on Houston and our city leaders, Hurricane Harvey showed us what it truly means to be a community and come together in spite of the danger.

"Our biggest fear when Harvey was about to hit, we talked about it here in the conference room, was that we would lose one of our own and sadly we did," he said.

The world saw as Chief Acevedo broke down to tell the media about Sgt. Steve Perez.

At the height of Harvey is when Houston saw a different side of the chief as he tweeted, Periscoped and was quick to respond to the media.