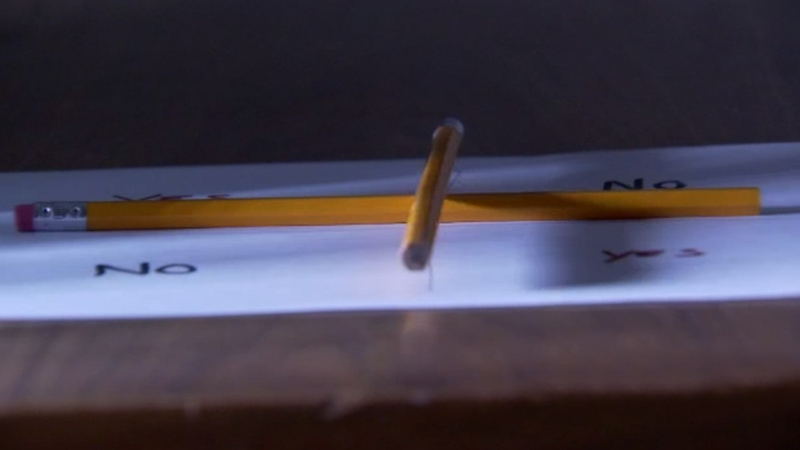 Religious leaders warn about summoning demons with the #CharlieChallenge

FRESNO, CA -- What appears to be a spooky game being shared all over social media by teens and pre-teens is prompting warnings by religious leaders around the world.

Kids are sharing videos with #CharlieCharlie, challenging each other to summon an evil spirit from Mexico. Now after millions of shares the Catholic Church is responding and a local pastor even brought it up in Sunday service.

The screams and shrieks are thrilling, of course but what's causing them is alarming many adults. Countless videos are being tweeted, vined and instagramed showing mostly kids taking the Charlie Charlie Challenge.

10-year-old Mariana Cruz is a Fresno 5th grader and Charlie is being talked about at her school. "You have to try to balance the pencils and you ask Charlie questions," Cruz said.

In the videos posted online it appears Charlie answers yes or no questions. Mariana says she's never taken the challenge because she knows it involves an evil spirit.

Tim Rolen, Senior Pastor at New Hope Community Church in Clovis has warned parents about the Charlie Challenge in Sunday services. "This could be an entry into something deeper," Rolen said. "Of course, as a pastor, if you believe in God there is also this awareness out of the scripture that there are demons in this world."

He had not heard about Charlie Charlie until parents began asking. And when he searched for specifics online, seeing that kids are inviting in a demon from Mexico, he had to speak up.

"You're asking children to pray to a demon, for a demon to give you directions," he said. "That could be pretty damaging and pretty powerful in certain situations."

Because of that Cruz says she's going to have a word with her daughter. "It's the first I've heard that she's heard about it," Cruz said. "But we'll talk more about it, now that I know she knows about it."

The Diocese of Fresno issued the following statement regarding the Charlie Challenge:

"The concerns regarding the social media game "Charlie Charlie" have been brought to the attention of some pastors and lay leaders in the Diocese of Fresno. Designated Pastoral Center staff are currently in dialogue to discern an appropriate response and resources to help guide parents, youth, and all individuals who have already engaged in this activity or are tempted to do so. The Diocese of Fresno echoes the concerns expressed in the Catholic News Service article dated May 27, 2015 regarding this issue."