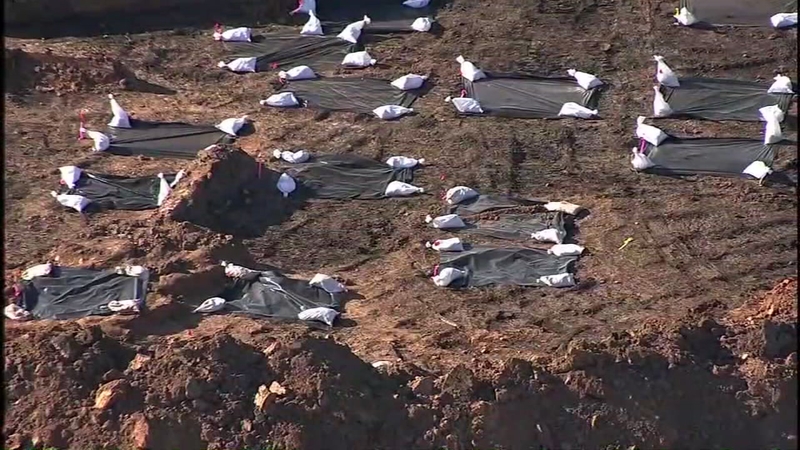 SUGAR LAND, Texas (KTRK) -- The headstones are cracked, and the surroundings are sparse. But, in a little corner of Fort Bend County, the Imperial Farm Cemetery is well-tended.

The men buried here died while they worked as convict laborers for sugar plantations that used to dominate the area. Many convict laborers at the turn of the century were buried in unmarked graves. The ones at Imperial Farm are fortunate to have Reginald Moore as their caretaker.

"I want to be the official spokesperson for the people in the ground," said Moore, who first became interested in historic cemeteries when he worked as a state prison guard in the 1980s.

Now retired, he has dedicated his life to preserving historic cemeteries in the Sugar Land area, including the newly discovered cemetery on land owned by Fort Bend ISD. The future technology center for FBISD is located just a stone's throw from the cemetery Moore already looks after.

In fact, it was Moore who first told FBISD officials, back in 2017, that the land probably has at least one cemetery, if not more.

"His presence had made people more aware of the fact out in Sugar Land there's cemeteries in a lot of different places," said Professor Ken Brown, a University of Houston anthropologist.

"It's not a surprise there's one over there," he added, pointing to the construction zone.

Professor Brown has studied cemeteries for more than 40 years. He says Sugar Land's history of plantations and prisons mean unmarked graves are common. For anthropologists and preservationists, it's often a challenge to get developers to follow state law, and report cemeteries discovered during construction.

In this case, Fort Bend ISD notified the Texas Historical Commission when it began construction in 2017. Moore says he kept the pressure on the school district to do the right thing. Therefore, he was not surprised at all when he was proven right with the discovery of the cemetery.

"Somebody told me I should be proud. But I'm not proud. I'm grateful, and I'm elated that these guys, God has called me to stand in the gap for them."

So far, neither Moore nor Dr. Brown have been allowed to visit the current cemetery.

FBISD said it's already working with state archaeologists. Moore says he expects to eventually be allowed on the property, though the timing isn't clear.

Dr. Brown said he has no doubt Moore will get what he wants.