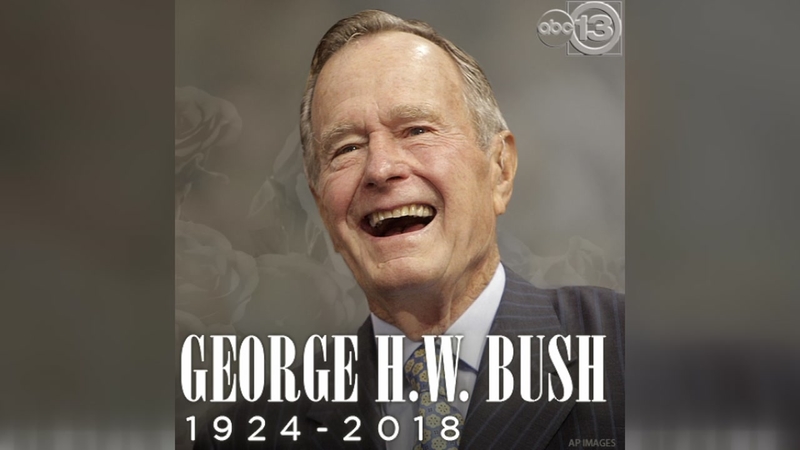 Amid the passing of President George H. W. Bush, major elected officials, celebrities, and local business' have payed their respects on social media.

America has lost a patriot and humble servant in George Herbert Walker Bush. While our hearts are heavy today, they are also filled with gratitude. Our thoughts are with the entire Bush family tonight – and all who were inspired by George and Barbara’s example. pic.twitter.com/g9OUPu2pjY

As a public servant, father, and grandfather, President George H.W. Bush was an extraordinary example for us all. His spirit of service and decency will be missed by many, including our family. I hope his memory will be a guiding light for our country and those around the world. pic.twitter.com/jUSU82TnO1

Hillary and I mourn the passing of President George H. W. Bush, and give thanks for his great long life of service, love and friendship. I am grateful for every minute I spent with him and will always hold our friendship as one of my life’s greatest gifts. https://t.co/1CYdrIeKmz

George H.W. Bush dedicated his life to service and leadership — in uniform, in Congress, in intelligence, and as our President.

God bless @JebBush and the entire Bush family. May we honor his legacy by striving to be a "kinder and gentler nation” today and always.

On behalf of @HoustonTX , I extend condolences to the entire Bush Family. We all loved @GeorgeHWBush. The former president was a statesman and a uniter. The city will announce plans soon for a celebration of life to pay our respects to Mr. Bush and honor his legacy. pic.twitter.com/5vsun4NktK

Sending my condolences and prayers to the family and friends of President George H.W. Bush and to the American people who are mourning his passing. May his devotion to public service and his commitment to his family be an inspiration to us all.

No one did more to serve our country nobly and well from war hero to President than President George H.W.Bush. I knew him. I worked with him. I learned from him and twice he came to my rescue when others didn’t have the courage to do so; the Teamsters case and my first election .

A friend of the world, nation & all in Texas: #GeorgeHWBush was a #pointoflife until death & we'll miss him for his firm, determined leadership & his unceasing love for God, country and family - My deepest sympathies to his family - May he rest in peace.https://t.co/HRCCAoKZuK

The men & women of @houstonpolice extend our deepest condolences to the Bush family & stand ready to serve our President one last time as our City, State, Nation & the free World honor his lifetime of service. May he rest in eternal peace & joy alongside FLOTUS Bush. https://t.co/iussAUeNuu

President George H.W. Bush, may you rest in peace knowing your legacy of service, dignity, and respectability are among the hallmarks of your presidency. The presidency didn’t define you. You defined your presidency.