'That was God at work,' says man who rescued Casey Hathaway 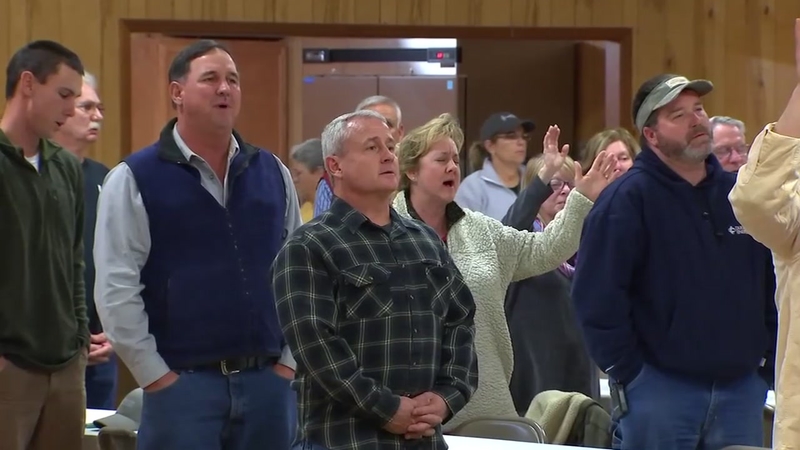 CRAVEN COUNTY, North Carolina -- Three-year-old Casey Hathaway was tangled in vegetation and calling for his mother when EMS Capt. Shane Grier and another rescuer found him in the woods Thursday.

"We immediately at that time got him out because the conditions were really cold, got him out to warm him up," Grier said Friday, getting emotional when he recalled seeing Casey. "He became more responsive the further we got him out."

Grier said they were following up on a tip about a voice in the woods. Grier pulled Casey out of the vegetation and other rescuers stepped in to help lead the boy to safety.

Casey Hathaway continues to recover from an ordeal after being missing for nearly three days.

There was enough vegetation to hold him in place, Grier said.

“That was God at work.” Shane Grier, Chocowinity EMS Captain, rescued 3-year-old Casey Hathaway, who he found tangled in vegetation. But Grier says there was a greater power helping. The story at 4p #ABC11 pic.twitter.com/3w9FU4lp1I

Casey had spent more than two days on his own, some of that time in below-freezing temperatures. He was found a quarter of a mile from the Craven County home of his great grandmother. That's where he was reported missing Tuesday afternoon after two children he was playing with went inside without him.

Grier admits he was afraid that Casey might not survive much longer on his own in the rough terrain and cold temperatures.

He was relieved when he saw the boy.
"He went through some very bad conditions, weather-wise," Grier said. "We had heavy rain. Everything in there was wet. Everything was wet. It's just not a good situation for anyone. Even a trained professional would have difficulty in that environment."

“Welcome Home Casey.” This sign at Kitt Swamp Christian Church in Craven County shows how happy the community is that 3-year-old Casey Hathaway was found safe. The location where he disappeared and was found is not too far from here. #ABC11 pic.twitter.com/vuiIfb6em6

Casey's aunt, Breanna Hathaway, said that "when we got the news last night that Casey was found, I grabbed his little sister and she said, 'Aunt Bre, Jesus helped us find Casey.'"

Family friend Heather Garris said Casey has some scrapes, and that his hands and feet are swollen, but that he'll be just fine.

"It's a really overwhelming feeling that he's back and he's alive," Garris said. "I know that's really shocked the whole community. It's an eye-opener, definitely for a miracle -- believing in miracles because I've seen now they really do happen."

The community is rejoicing that Casey was found safe.

On Friday night, a celebration was held at New Haven Church's activity center.

"The food was donated. Different businesses stopping in and saying let us help. We want to do something," said assistant pastor Jonathan Ipock.

Prayers and songs went up in gratitude and praise for Casey's safe return. He was recovering in a New Bern hospital.

"We were looking at the news on social media and Casey saw his picture and he said, 'Aunt Bre, that's me!' I said, 'Casey, all these people were looking for you and trying to find you.' And he goes 'yay,'" Breanna Hathaway said.

Grier said the community came together to find Hathaway and pray for him. He said he believes a higher power stepped in.