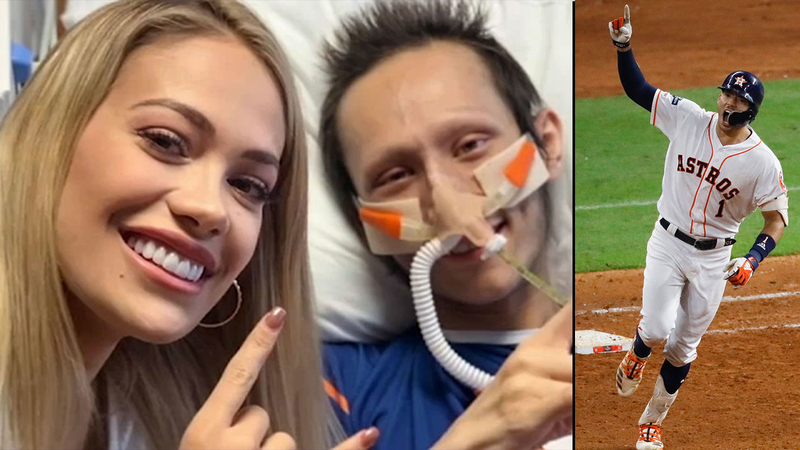 HOUSTON, Texas (KTRK) -- The soon-to-be Mrs. Carlos Correa is crediting her fiancé's game-winning walk-off home run to a 16-year-old cancer patient who has captured both of their hearts.

"I looked up at him, and I was like, the first person I thought about was Jalen, and (Correa) goes, 'You know what, so did I!'" fiancée Daniella Rodriguez told ABC13 via Facetime.

The couple met Jalen last Friday when they stopped by the hospital just one day after the Astros' big ALDS win over the Tampa Bay Rays.

That's when Correa promised to dedicate a homer for him.

"He just whispered to him, 'The next home run that I hit is going to be for you. When you see me pointing up, I want you to know that I'm pointing at you,'" Rodriguez recalls from their meeting with the teen.

What do you do after an ALDS win? Visit cancer patients
EMBED More News Videos

After a drama-filled slog on field, the magical moment came in the 11th inning of Game 2.

"It was so crazy, like, the fact that - I really feel like that adrenaline that Carlos had, and knowing that Jalen was in his mind really helped him push even harder," Rodriguez said.

The teen's football coach said all of this has been overwhelming.

"Broke my heart, but it also made me very happy to know people are taking the time to express their concern and their love and prayers to him," he told Eyewitness News.

The teen's parents say they have also been touched by the outpouring of support for their son.

Correa made one more promise to Jalen: that the next time he sees him, it'll be outside the hospital.