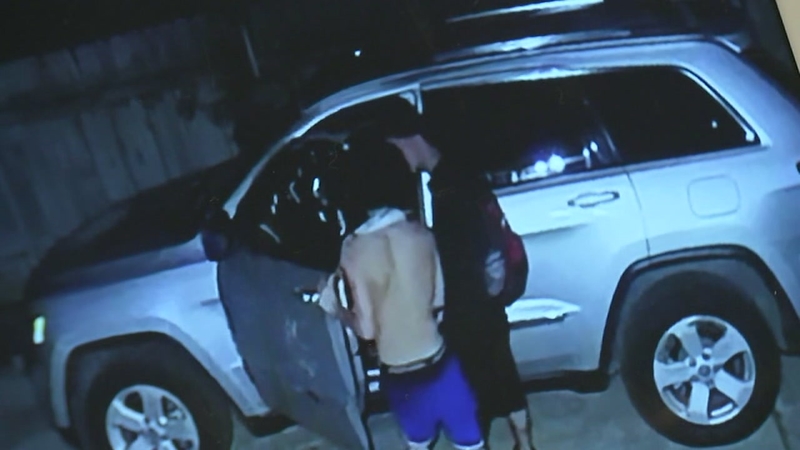 Police searching for thieves involved in back to back crimes

HOUSTON, Texas (KTRK) -- A Garden Oaks realtor was awakened early Friday morning by a phone call from her fiancée. "I just saw your truck stolen on video," is what Samantha Maret heard.

"I didn't get the alert because I left my cell phone downstairs," Maret said.

The Ring doorbell camera recorded two young men approaching her Grand Cherokee, then get in, tossing a potato chip bag onto the driveway. The car alarm never sounded. Maret suspects the thieves had a code grabber that intercepts the signal from car key fobs.

"Even before they got inside the car, the interior lights went on. Which means they had something to open it and start it," she said. "I had both key fobs to the truck inside the house." Code-grabbing is said to be happening more often in the world of car thefts.

Not long after she called 911, and notified the insurance company of the theft, she said HPD called. "They told me my truck had been found because it was involved in a hit and run crash."

According to police, the thieves rammed into another SUV and then ran away from the scene. The driver in the other vehicle wasn't seriously injured.

"I think the suspects might have been knocked around," she said. "I was told the driver had to help the other guy get out of my truck."

For her, technology appears to have been a curse and a blessing in this vehicle theft. It was captured on a doorbell camera, which provided evidence for police. But it was a code-grabber that may have allowed the truck to be stolen.

"I'm still trying to wrap my head around all of that," Maret said. "But what these guys are doing is wrong, I don't believe this community will stand for it, or any other one."