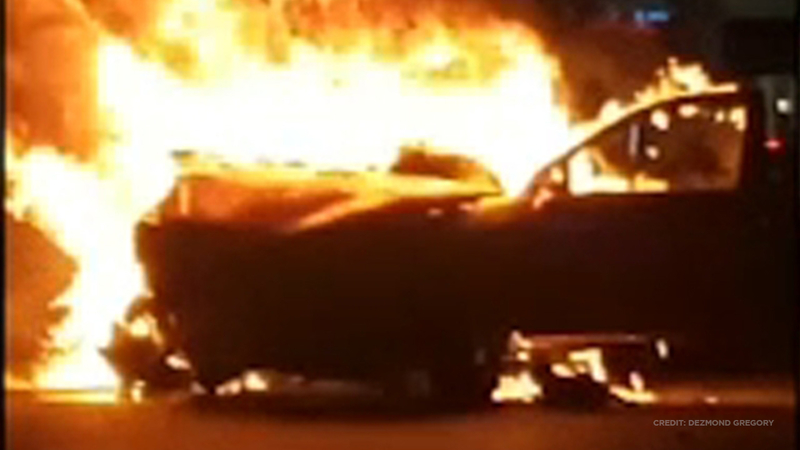 HARRIS COUNTY, Texas (KTRK) -- A driver was saved from a burning car by a pair of good Samaritans in northwest Harris County.

It happened on Highway 249 near Antoine Drive around 10:30 p.m. Tuesday. The two rescuers saw the burning car in the middle of the road and jumped into action.

Cell phone video sent to ABC13 by a viewer shows images of the burning car. Flames were covering the vehicle as the rescuers ran over to help.

The video shows the flames growing as the rescuers approach the vehicle. You can also see the man they saved after getting him out of the car.

"We took him across the street to the nearest parking lot to lay him down and to check on him and make sure he's fine, talking and responsive," explained one of the rescuers, Dezmond Gregory.

Harris County deputies say the driver of the car was headed southbound on Highway 249 when he hit a pole at Antoine Drive. That's when he bounced off another pole and his car ended up in the middle of the intersection.

The driver is a man in his 60s and was taken to the hospital. He's expected to be okay.

"With the help of the good Lord, I give him praise for it, because he allowed us that time for us to get him out," said the second rescuer, Pastor Curtis Brown.

Deputies are not sure what caused the crash, but applaud the efforts of the men who rushed in to save someone in need. Major Mike Lee with the Harris County Sheriff's Office took to Twitter to thank Gregory and Brown for their help.

Let’s hear it for these 2 heroes! A car traveling on 249 near Antoine, hit a power pole rolled over & burst into flames. Dezmond Gregory & Curtis Brown immediately jumped into action & pulled the elderly driver from the burning car. @HCSOTexas thanked them for their actions. pic.twitter.com/B1YsTKbiqa

Mail truck bursts into flames in a southwest Houston neighborhood