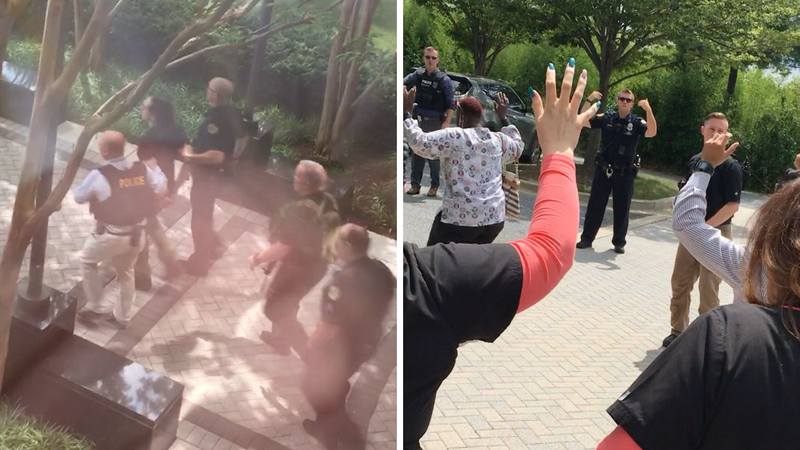 ANNAPOLIS, Md. -- Tense video showed the aftermath of Thursday's fatal shooting at the offices of the Capital Gazette newspaper office in Annapolis, Maryland.

Marjorie Rock was at her dentist's office when the shots rang out in the newsroom one floor down. She told ABC News she was about to leave the office when a staff member who had heard shots told her to stay in the office behind the locked door.

Through a window, Rock watched as armed officers rushed into the building. She later saw first responders as they escorted a suspect out of the building in handcuffs, and Rock said he was "calm and cooperative."

Rock watched as others in the building were evacuated, including at least one deceased victim.

"I knew he was dead because I'm a nurse," Rock told ABC News. "He was shot in the abdomen."

Officers eventually made their way to the office where Rock was sheltering in place.

"Alright ma'am, you're safe now, okay?" an officer can be heard saying as Rock and others in the dentist's office were evacuated. First responders led Rock and five others out of the office suite and instructed them to take the elevator down to the lobby of the building.

When the elevator doors opened on the ground floor, a chorus of officers ordered the evacuees to exit the elevator with their hands up and proceed through the parking lot of the office building. They were eventually taken to a holding area where they were interviewed by investigators.

Three editors, a reporter and a sales assistant were killed in the Thursday afternoon rampage. Jarrod W. Ramos, 38, was charged with five counts of murder in one of the deadliest attacks on journalists in U.S. history.

Ramos, a former information-technology worker for the federal government, had a long-held grudge against the Capital Gazette. He filed a defamation suit against the paper in 2012 after it ran an article about him pleading guilty to harassing a woman - the lawsuit was thrown out by a judge as groundless - and he repeatedly targeted staff members with menacing, profanity-laced tweets.