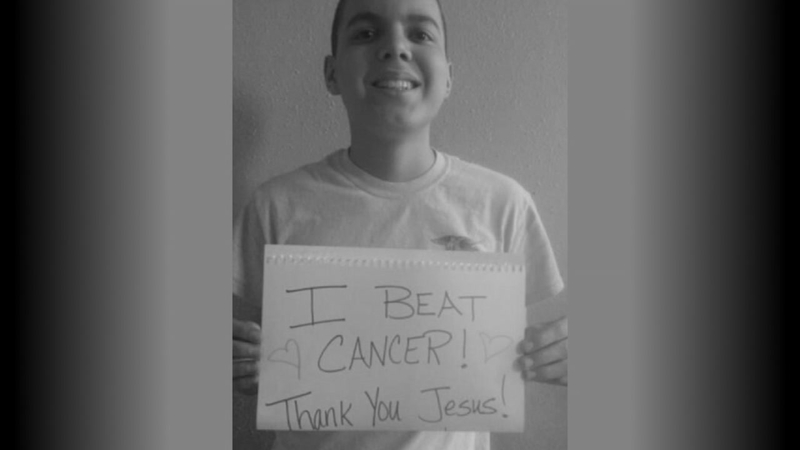 HOUSTON (KTRK) -- On Monday, Jacob Munoz tossed a football to his father in the front yard of The family's Spring home.

For Jacob and his parents, it was nothing short of a miracle.

A year ago, the then-13-year-old was sick to his stomach and had an excruciating headache. What an initial diagnosis indicated was a migrane, was something far more serious.

After three days of doctor and ER visits, Jacob was diagnosed with a rare form of leukemia. Intense therapy and treatment reduced the once energetic middle school football and basketball player to one who could barely stand. Much of that year was spent in hospitals, with his parents willing him to fight and live.

The Klein school community turned out in force for Jacob, hosting blood drives and dedicating football games to him.

That is why last Friday, Yvette Munoz's world did a 180-degree shift.

"The lab results came back and I was told Jacob had no cancer cells," she said.

She posted a picture of her son on Facebook, holding a hand-lettered sign that read, "I am cancer free. Thank you Jesus."

Along with the story, the post has generated hundreds of thousands of shares, likes and comments.

"I want to let people know that there's hope. Cancer is not a death sentence," Munoz said. "And most of all, God hears our prayers."

The prayer chain, she said, was global. It went from the US, to Europe, to India and points in between.

Jacob will still have to have spinal taps several times a year, to monitor for signs of cancer cells. He still has a port in his chest in case more chemotherapy might be required.

His parents see all that as temporary.

The family attends a Klein-area Evangelical church. Sunday night, Munoz gave her testimony before the congregation, and was stunned when her son opened his arms to hug her in front of the crowd. He's a typical teenage boy, trying to assert his independence, but this has changed him, and his family.

"Good," is the way he said he felt Monday. He's shy and soft-spoken but he did have a message he wanted to share: "Never give up and keep fighting," he answered.

His parents believe it's a powerful message.

Munoz wants to speak at other churches, to let people know, whatever their burden, there is hope. She also has a book in mind.